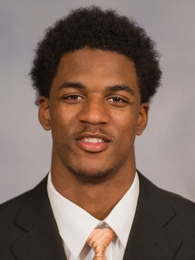 Safety
B I O
Sophomore who has seen most of his action on special teams, but has been a valuable backup as a safety ... moved from wide receiver to safety after the 2013 season ... has 32 tackles, one interception and 24 kickoff returns for 505 yards in 147 snaps over 11 games (one start) on defense in his career ... has two receptions in 147 snaps over 12 games on offense in his career.

Before Clemson: Scored nine touchdowns and averaged 22 yards per reception as a senior at Sylacauga High School ... had 25 tackles and four interceptions as a senior ... outstanding kick returner ... No. 18 player in Alabama by ESPN ... No. 56 athlete in the nation by ESPN ... coached by Matt Griffith at Sylacauga High School ... recruited by Robbie Caldwell.