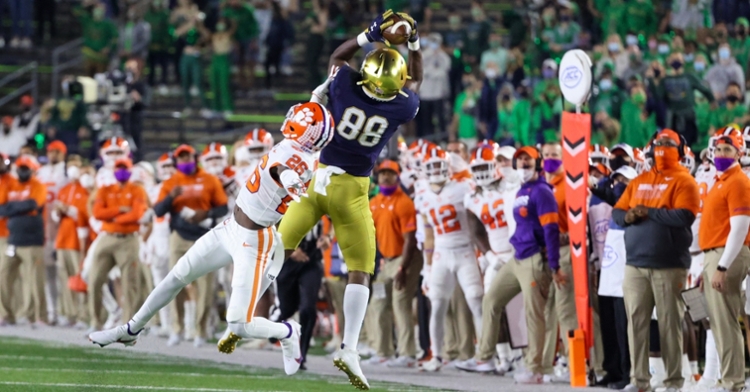 An instant classic in South Bend ended in heartbreak for the Tigers and jubilation for Notre Dame.

No. 4 Notre Dame stopped No. 1 Clemson’s desperation pass on fourth down and defeated the Tigers 47-40 in two overtimes at venerable Notre Dame Stadium Saturday night.

The loss overshadows a fantastic effort by true freshman quarterback DJ Uiagalelei, who finished 29-44 for 439 yards and three scores, the most yards ever given up by Notre Dame to an opposing quarterback. Clemson’s offensive line continued to struggle and Travis Etienne finished with just 28 yards on 18 carries, and his fumble led to an early Notre Dame touchdown.

"First of all, I just want to say congratulations to Notre Dame," head coach Dabo Swinney said. "It obviously didn't go our way but it's an instant classic for sure. It was an unbelievable college football game. Both teams displayed incredible competitiveness, incredible heart, incredible will to win. It was unbelievable to watch. At the end, we made a couple, too many mistakes. They made a couple of more plays than we did. Congratulations to Notre Dame and Coach (Brian) Kelly.

Notre Dame won the toss and elected to receive, wanting to make an early statement. They made that statement loud and clear, driving down the field in just two plays for the score. Kyren Williams went over the left side and rumbled untouched 65 yards for the score and a quick 7-0 lead.

Clemson was forced to punt and the Irish kicked a field goal on the ensuing drive to make it 10-0, and the Tigers finally responded. Four plays into the drive, Uiagalelei hit Cornell Powell on a beautiful post pass for a 53-yard touchdown, and the Irish led 10-7 midway through the first quarter.

The Irish added a 27-yard field goal to make it 13-7, and Potter hit a 25-yard field goal of his own midway through the second quarter that made it 13-10 Notre Dame. The wheels then fell off for the Tigers.

The Clemson defense finally forced a Notre Dame punt, but on the first play from scrimmage Uiagalelei pitched the ball to the side to Etienne, who muffed the pitch and the ball bounced off a player and into the arms of Jeremiah Owuso-Koramoah, who returned it 23 yards for a touchdown and a 20-10 lead for the Irish.

Clemson’s offense continued to make mistakes – Amari Rodgers fumbled on the ensuing drive – and the Irish kicked their third field goal of the half to go up 23-10 with 2:41 to play. Clemson drove down the field and added a 45-yard field goal from Potter, and Notre Dame led 23-13 at the half. According to Elias Sports, Clemson is the first team to be ranked No. 1 in the AP Poll and trail by 10+ points at halftime in consecutive weeks over the last 75 years.

Clemson came out and ran a nine-play, 36-yard drive that ended with a 46-yard field goal from Potter, and early in the third quarter Notre Dame led by a touchdown, 23-16.

The Clemson defense forced another punt and the Tigers took over at their 40. Uiagalelei then engineered a 13-play, six-and-a-half-minute drive that tied the score. Included was a beautiful third-down throw to Etienne, a conversion on fourth-and-inches at the Notre Dame 10, and ended with a gorgeous pass to Davis Allen on a crossing route that covered 10 yards. Late in the third quarter, the score was tied at 23-23.

Notre Dame responded with a long drive – aided by a controversial 45-yard pass that looked like it bounced off the turf but was ruled complete – and appeared poised to retake the lead. The drive reached the Clemson 7-yard line, but Jake Venables punched the ball out of Ian Book’s hands and the ball bounded into the end zone and was recovered by Nolan Turner for a touchback.

The Tigers were unable to gain a first down, and after a punt the Irish used a big third-down reception to get yet another field goal – this one from 44 yards – and Notre Dame led 26-36 with just over 11 minutes to play.

The first play from scrimmage for the Tigers was a 51-yard bomb from Uiagalelei to Cornell Powell but had to settle for a 30-yard field goal from Potter, and with 9:42 to play the game was tied at 26-26.

The Tigers forced a punt and took over at their own 26. Three plays netted nine-plus yards, and facing a 4th-and-1 at the Clemson 35, Swinney elected to go for the first down. The Irish were offsides, however, and the Tigers made them pay. A 16-yard pass to Rodgers, a 13-yard pass to Etienne, and a bruising 15-yard pitch-and-catch with Cornell Powell put the ball at the Notre Dame. Etienne cartwheeled into the end zone from three yards out and the Tigers led 33-26 with 3:33 to play.

A big chunk of the yardage came on the fourth play of the drive when Book hit Avery Davis over the middle for a 53-yard gain that put the ball at the Clemson four. Two plays later Book hit Avery on the goal line for the score – with just 22 seconds remaining – and the score was tied at 33 and the game headed to overtime.

Notre Dame won the toss and gave the ball to Clemson, and it took the Tigers exactly one play to score when Uiagalelei hit Powell on a slant that Powell turned into the 24-yard gain. The original call was a touchdown, but a review ruled Powell down inside the one. Uiagalelei simply went over the middle for the score and Clemson led 40-33.

Notre Dame tied the score on a three-yard run by Williams, sending the game to a second overtime with a 40-40 score. The Irish got the ball first in the second overtime, and it was Williams on another short touchdown run that put Notre Dame ahead 47-40.

Uiagalelei was sacked on the first two plays of the second drive and the Tigers failed to convert on a long fourth-down play to end the game.

Clemson has an open date next week, and is expected to get quarterback Trevor Lawrence back from the COVID list, while several other injured players will use the time to heal. The next game is at Florida St. on Nov. 21st.