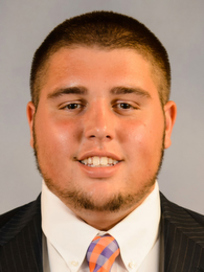 Offensive Guard
B I O
Original walk-on … has played 56 snaps over eight games in his career.

2016: Played three games as a redshirt freshman … appeared against SC State for a total of 15 snaps, grading 87 percent … played six snaps in win over Syracuse … appeared in five plays against South Carolina.

This One Goes Out to our Texas Ballers -- We Thank You