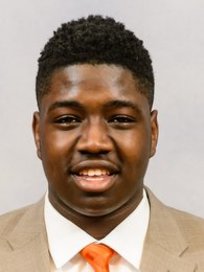 Linebacker
B I O
Linebacker who enrolled in January 2015 … valuable contributor on special teams, primarily on the kickoff-coverage unit, his first three seasons … entered 2018 with 28 tackles, two tackles for loss and two quarterback pressures in 102 snaps over 39 games in his career … one of five Tigers to earn a national championship ring as a second-generation Tiger.

2018: Posted two tackles each in wins against Furman and Georgia Tech.

2016: Produced six tackles in 25 snaps (13 games) … played nine snaps against SC State, with a quarterback pressure … had two assists in seven snaps at Boston College … logged three snaps against Syracuse … notched special teams tackle in win over South Carolina, and again the following week versus Virginia Tech … had a first hit on kickoff coverage in the National Championship win over Alabama.

2015: Had nine tackles, including six on special teams, in 23 snaps over 13 games … logged six snaps and a tackle in the opener … logged three snaps at Miami, with a special teams tackle … posted kickoff coverage tackle at Syracuse … logged significant action against Wake Forest and responded with four tackles … had a special teams stop in the ACC Championship Game and Capital One Orange Bowl against Oklahoma.

Before Clemson: Originally signed with Clemson in 2014 … starting linebacker on the Daniel High School team that had a 14-1 record and played in the state championship game as a senior; one of the reasons Daniel held 10 teams to 10 points or less and posted five shutouts … had 86 tackles, 16 for loss, seven sacks, and a blocked punt as a senior … coached by Randy Robinson at Daniel High School … recruited by Chad Morris.