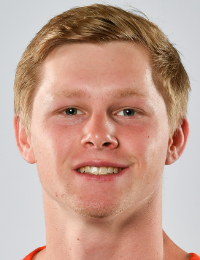 Guard
B I O
Overview
Walk-on point guard joined the Tiger team in the summer of 2015 … known as a relentless worker who gets the most out of his ability … one of most respected players on the roster … has appeared in 14 games through three seasons … majoring in pre-business.

2017-18
Appeared in four games for the Tigers off the bench … accumulated eight minutes of game action, shooting 0-for-2 from the floor and 0-1 from three … tallied one assist.

2016-17
Recipient of the team’s Tom Lynch Most Improved Award … appeared in four games, for a total of eight minutes … made his only shot of the season in win over Coppin State … had two assists and two steals, so he was active when he played … also earned minutes in games against Davidson, Mercer and SC State.

2015-16
Played six minutes in six contests … did not attempt a field goal, but did manage two assists in his court time … had a last-minute assist at Minnesota … appeared in one ACC game, the regular season finale, a win at Boston College.

Before Clemson
Three-time team captain at James Island Charter High School … started for three seasons, but fought numerous injuries over the course of his high school career including a broken arm prior to his junior year … led team his senior season with 2.3 steals per game … led James Island to a Region 7-AAAA title in 2014-15, and to the lower state championship game … posted 13 points in the lower state semifinals against South Florence, where his two free throws helped ice the game in the final 30 seconds of overtime … coached by Stan Wilkins … born Dec. 2, 1996.