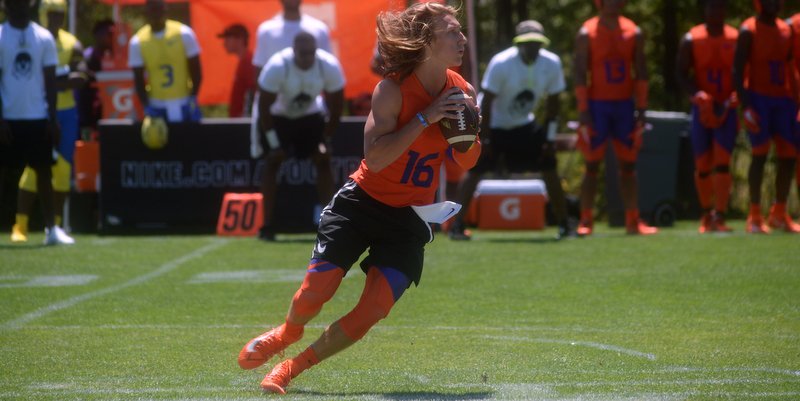 Lawrence built on an already strong start with over 300 passing yards in the first half Friday.

The nation's top-rated quarterback prospect will have the edge in most any matchup this season for Cartersville (Ga.). A little extra motivation didn't hurt either in another monster week for the five-star 2018 Clemson commit.

Trevor Lawrence led his Hurricanes versus Calhoun (Ga.) Friday, but had his say on the opponent before kickoff.

The Calhoun football Twitter account said they were going to "travel south to take on Trevor Lawrence...I mean Cartersville in non-region action." Lawrence was not amused by the joke:

He answered the perceived bulletin-board material to the tune of five total first-half scores while putting Cartersville up 51-0. With his job done, he watched the Hurricanes finish off a 58-6 win to improve to 3-0.

The 6-foot-6 QB connected on 13-of-20 passes for 317 yards with four touchdowns, and added another score on the ground.

On the season, Lawrence has thrown for 950 passing yards with a 69.4 completion rate, 10 touchdown passes and one interception.

Check out the rest of the week for Clemson's commits below:

Kendrick put together another strong performance in a 45-9 win over Rock Hill. The South Pointe quarterback rushed for 94 yards and two touchdowns on 10 rushes and completed 10-of-16 passes for 150 yards and two more scores. Through three games, Kendrick has a 78.7 completion percentage for 692 yards with seven passing touchdowns.

Jones Jr. notched a sack for a safety to swing momentum IMG Academy's way in a 40-20 road win over No. 9 Centennial (Calif.) in the Honor Bowl.

A @Cen10Football fumble and @_mjones24 with the big hit for the safety. @IMGAFootball leads 26-17 late 3rd qtr. @honorgroup @SportsRecruits pic.twitter.com/jugAfwwudS

Thomas added a pass breakup and TFL on the night. Watch more from the Clemson commits' night below:

Potter added to his points total with a 32-yard field goal and four PATs in another blowout South Pointe win.

Venables posted a sack in a tough night overall for Daniel, which lost 13-0 to rival Seneca.

Mascoll's South Gwinnett side struggled to a 35-7 defeat to Brookwood (Ga.).