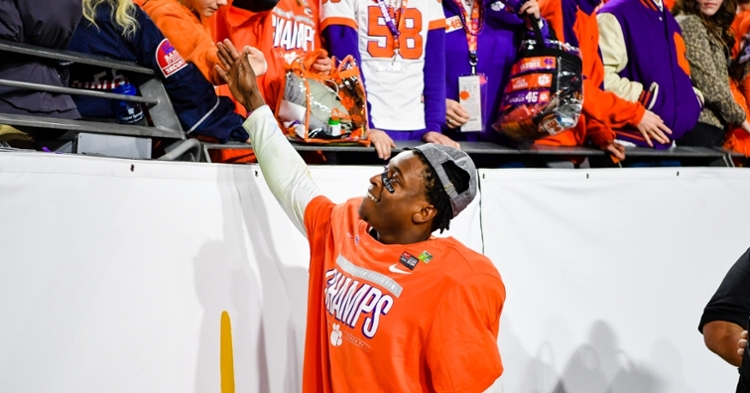 Check out comments from head coach Dabo Swinney and their position coaches on the trio of draftees.

SAFETIES COACH Mickey Conn: “K’Von Wallace is a highly motivated football player. He’s smart and very instinctive player. He can play multiple positions. He can play safety, he can play nickel, he can play corner, and he plays them all really well. He is extremely determined to succeed. He will learn the playbook and he will get the job done; he’ll learn it early too because he’s extremely smart. He’ll be great on special teams, and he’ll make a huge impact. He’s a very unselfish player and willing to take on whatever role is best for the team. He’s a great team player and pulls for his teammates. He’s a very, very unselfish person and a winner, and that’s what they’re getting in taking K’Von Wallace.”

HEAD COACH Dabo Swinney: “John Simpson was a captain and a graduate and is as good of an offensive lineman as we’ve had come through Clemson—going on 18 years, my 18th season—as good an offensive lineman as I’ve seen here. He’s ready-made. He’s what everybody’s looking for at the next level. He’s got all the measurables that everybody’s looking for as far as the strength, size, athleticism, flexibility and power. He’s been a great player for us. He’s played against the best of the best. I’m excited about his continued development at the next level.”

OFFENSIVE LINE COACH Robbie Caldwell: “John Simpson is a big guy and mighty powerful. He brings an athleticism to the Raiders that is very special for a guy his size. I think he’s going to help the Raiders in the run and the pass game.”

HEAD COACH DABO SWINNEY: “Tremayne Anchrum was a very underrated guy in this draft. He has been a four-year starter out of position and has played against the best of the best from Chase Young to Clelin Ferrell and everybody in between. He’s incredibly smart, very athletic, strong, and has a great football I.Q. He is another guy that’s going to change a locker room from a leadership standpoint. He is a captain and a graduate. He brings a lot of versatility to the offensive line because he can play tackle, obviously, because he started for us at this level for four years, but I think he’s got a chance to really make a really good guard at the next level.”

OFFENSIVE LINE COACH ROBBIE CALDWELL: “Tremayne can play several positions and is going to bring an intelligence factor to the Rams. He can play left or right and also has the ability and the knowledge to play center as well.”