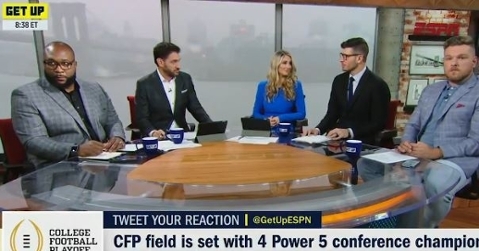 Shocked faces when Orlovsky predicts Clemson to win it all

A high number of national media pundits believe that Clemson will be overmatched by the likes of LSU and Ohio State in the College Football playoff.

ESPN analyst Dan Orlovsky is not one of those as he predicted Clemson to win the upcoming playoff to the dismay of his confused colleagues sitting beside him on Monday morning's ESPN telecast of 'Get Up.'

"I'm taking Clemson to win the whole thing," he said. "I think Clemson has this defense that not enough people are talking about. They lost all those first-rounders. Everything that was on that defensive line has gone to the back seven — twenty-eight game winning streak in a row."

Orlovsky proves that he is watching the games by talking up Lawrence's impressive season.

"Listen, Joe Burrow (LSU QB) has been amazing. He's great, Heisman award winner. Quarterback Trevor Lawrence is playing just as good as Joe Burrow. He can make throws into tight windows. Matthew Stafford was like this. He would make some throws, don't do that. Oh, that's why you did that because only you can make those throws. Trevor Lawrence can make throws that nobody else in the College Football playoff-wise can."

He goes on to speak highly of Clemson's running game.

"Travis Etienne is the toughest back in the country to tackle."

In your opinion, which is the best team in the Playoff?@danorlovsky7: "Clemson." pic.twitter.com/IDMvFMTZQG

SEC Network analyst Marcus Spears had to have a heated rebuttal about Clemson.

"Look, first of all," he said. "Who has Clemson played? Let's be honest. We have to stop having this conversation like we know what we think Clemson is going to look like against Ohio State. They haven't even played anyone remotely close to what Ohio State is."

We doing this? @mspears96 Like Clemson doesn’t have a great team, like they haven’t been great? It doesn’t matter who they play they dismantle everybody they play. (Outside of one and everybody treats that like it was an L apparently) and they haven’t even had to play 4quarters pic.twitter.com/BmIrjYHnie