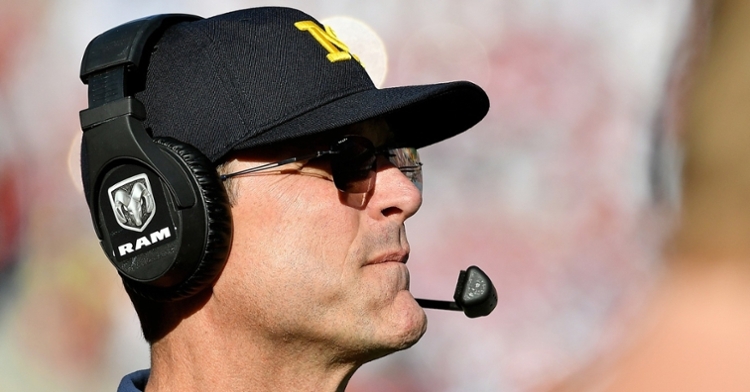 Harbaugh is in favor of the one-time and graduate transfer rules. (Photo: Jasen Vinlove / USATODAY)

Trevor Lawrence was touted as NFL-caliber as early as his senior season of high school by former pro and QB guru Trent Dilfer.

Michigan head coach Jim Harbaugh is proposing a rule that would have had Lawrence eligible to go to the NFL after his record-setting and national-championship-winning freshman year.

Harbaugh published an open letter that proposed some big changes to the NFL draft process for college athletes.

2. "The individual leaving college 'early' prior to graduation who signs an NFL contract would be entitled to complete his degree while in the NFL, or return to the institution that he left, to continue his college career as a student once his pro career was completed. This would be done at the expense of the University based on a schedule of years participated in college...Such a policy promotes higher education as a top priority."

3. "A broadening of the rules to permit a student-athlete and his family to consult with and seek advice on or before signing a professional contract from lawyers and agents so long as the S/A does not receive compensation."

"The average pro career is three to four years," Harbaugh said. "When a players’ pro career is complete, he could return to college to finish his degree. He is then not denied his professional opportunity and is more mature and likely more motivated to finish his college education and receive his degree. He also is uniquely positioned to enhance the educational experience of other classmates on campus. This option creates a scenario more likely for more young men to have reached thirty having earned both a pro career and a college degree."

Harbaugh also put forth for consideration five years of eligibility (effectively ending the redshirt) and eliminating the hard cap of 25 scholarships allowed per year in recruiting.

He is also in favor of the graduate transfer and one-time transfer rules.

Jim Harbaugh wants to overhaul the rules of college eligibility of when is the right time to turn pro and enter the draft, as this letter shows. Baseball and hockey already have changed, and basketball is about to change, and Harbaugh wants to empower the student-athlete. pic.twitter.com/lQLb10H8SR