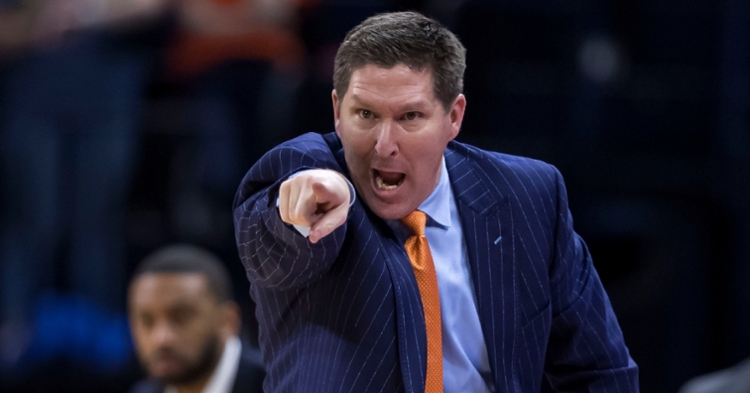 Georgia Tech broke two of Clemson’s streaks Tuesday night in Atlanta, breaking a five-game losing streak in the series and ending the Tigers’ three-game winning streak with a 68-59 victory at McCamish Pavilion.

The score was tied five times in the first six minutes of the first half, but Tevin Mack’s jumper off a Tech turnover gave Clemson its biggest lead of the half at 19-14 with just over eight minutes to play. A few minutes later, Simms hit back-to-back layups to five the Tigers a 25-20 lead with 5:51 to play in the half.

The Tigers then went cold from the field while Tech put togethers its best few minutes of the opening stanza. The Jackets scored five straight to tie the score at 25-25 with 3:32 on the clock. Simms hit two free throws to make it 27-25 Tigers with 2:20 to play, but Alex Hemenway fouled Bubba Parham on a 3-point attempt and Parham hit all three free throws as the Jackets went ahead 28-27.

James Banks’ dunk completed a 9-0 run for the Jackets, who took a 34-27 lead with just 37 seconds remaining, but Simms hit a second chance driving layup with four seconds on the clock and Tech led 34-29 at intermission. The Tigers were just 1-7 from beyond the arc and 13-27 overall from the field in the first half.

Tech scored the first two points coming out of the half to go up 36-29, but the Tigers went on a 7-0 run behind two layups from Al-Amir Dawes and a 3-pointer from Simms that tied the score at 36-36.

Every time the Tigers looked like they would make a run they would commit a turnover or miss a shot and the Jackets were able to keep a working margin. Curran Scott hit one of two free throws to pull Clemson to within three at 49-46, but the Jackets went on a 7-0 run to extend their advantage to double digits at 56-46 with 6:33 left to play.

The Jackets kept that working margin the rest of the contest.

"We didn't play well enough to win tonight. A lot of that credit goes to Georgia Tech. They've got great players, and they're hard to cover. I thought we were soft offensively. I'm a little disappointed in us. We committed 16 turnovers against a team that wasn't really pressuring us. If you don't make a lot of threes, you can't overcome 16 turnovers."

"We really came into the game in a good way. Georgia Tech was excited. They always have confidence in this building. It was back and forth for a while there, and, all of a sudden, we had a bunch of bad possessions, and it got away from us. Georgia Tech's one of the hardest teams to guard because they have good guards who play a bunch of one-on-one basketball. They've also got big strong guys to dump off to."

Clemson vs. GT boxscore
ONE DAY ONLY! Fanatics.com Black Friday Sale 20% off on orders over $75
Comment on this story