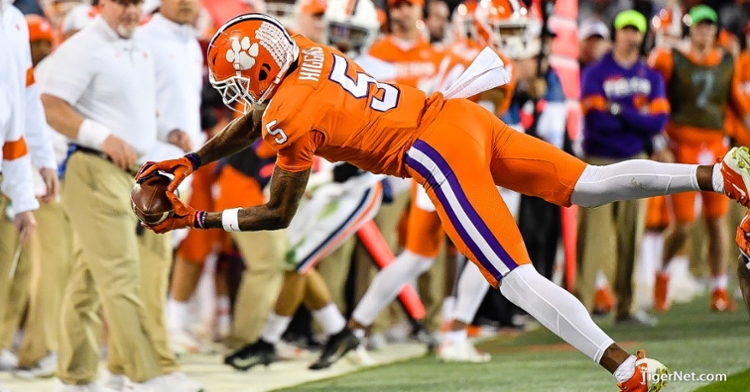 … All three of those scoring tosses went to Higgins, as the duo teamed up for 5- and 10-yard touchdown plays in last year’s 42-10 win over Pitt.

· Clemson allowed a first-quarter touchdown for only the second time this season when Virginia QB Bryce Perkins connected with Hasise Dubois on a 20-yard scoring play at the 6:22 mark of the opening period … The Tigers have outscored their opponents 170-17 in the opening quarter this season … The Cavaliers had opened the game by driving to the Clemson 12, but Tiger S Nolan Turner made his first interception of the season in the end zone to stifle that threat.

· Lawrence closed the first half 12-of-15 passing for 235 yards and two touchdowns for a passing rating of 277.6 … Lawrence’s three touchdowns passes in the opening half tied the ACC Championship record for a full game, as did Higgins’ two touchdown receptions.

· Clemson’s 31 points set an ACC Championship Game record for points scored in a first half, breaking the previous mark of 28 first set by Florida State versus Georgia Tech in 2014 and matched by the Tigers versus Pitt last year.

· Perkins also moved into third on the UVA career passing list with 5,770.

· With eight receptions, Hasise Dubois moved up two spots into sixth place in all-time receptions at UVA with 139.

· Dubois’ career high for receptions in a game is nine, set at Notre Dame earlier this season.

· On Virginia’s first-quarter touchdown drive, Bryce Perkins accounted for all of the Cavaliers’ yardage, with the exception of a 5-yard Clemson penalty (5-for-7 passing, 59 yards; 4 rushes, 14 yards).

· Virginia’s defense surrendered its most points in any half this season (previous was 24 in second half last week vs. Virginia Tech).

· UVA gave up 345 yards in the first half. Coming in, the Cavaliers’ defense was allowing an average of 336.5 yards per game this season.

· Clemson’s touchdown on its game-opening drive was just the fourth TD allowed on an opening drive by the UVA defense in 13 games this season.

· First-Team All-ACC WR/KR Joe Reed will not play today because of injury.