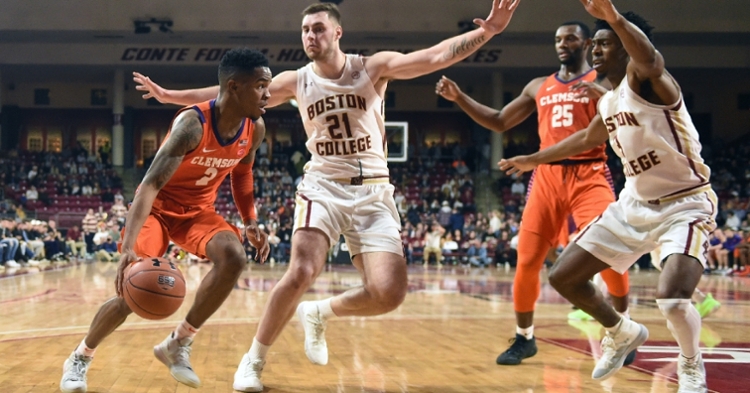 A career night from freshman guard Al-Amir Dawes led the way in a dominating 82-64 win at Boston College Saturday night.

Clemson led by as much as 15 points in the first half thanks to some hot shooting and high-percentage chances. They started the game on a 10-0 run and made 10 field goals in a row en route to the 15-point edge, knocking down 14-of-18 shots overall to that point. The Tigers’ point guard Dawes continued his ACC-season surge with 13 points on 5-of-8 shooting at the half. He finished with a career-high 22 points.

Clemson then started strong out of the half again to quickly push the lead to 20 points and force a BC timeout just over two minutes in -- and kept the Eagles at bay for the remainder.

The Tigers have averaged 77 points per game over the three-game winning streak after topping the 70-point mark only five times in their first 13 ACC games. Dawes was joined in double-figures by Aamir Simms (12), John Newman (11), Tevin Mack (11) and Hunter Tyson (11).

They finished shooting 68.9 percent from the field, breaking the program record for the best shooting percentage compiled by the Tigers in a road ACC game.

Clemson stays on the road at Georgia Tech next on Tuesday (9 p.m./ACC Network).

"That was a great shooting performance by us tonight. Outside of turnovers, that might've been our most complete performance of the season on both ends of the floor. [Al-Amir] Dawes knocked down a bunch of 3-pointers, which gave us a lot of energy. I think that, except for the turnovers, we played about as well as we could possibly play."

On the keys to the win:

"We had great practices leading up to this, and we had a great shootaround this morning. Our guys came in with good energy and poise, and that made a difference. The ball going in the basket like it was for us tonight always makes a huge impact. The guys made halftime adjustments, and I wish we could always play like we played those first five minutes of the second half."

On his outlook moving forward:

"I'm super proud of the way our guys have played these past few weeks. We're going to try to build off this and finish the regular season strong."

Clemson-BC box
Get the All-New Clemson Nike Shoe before it sells out!
Comment on this story