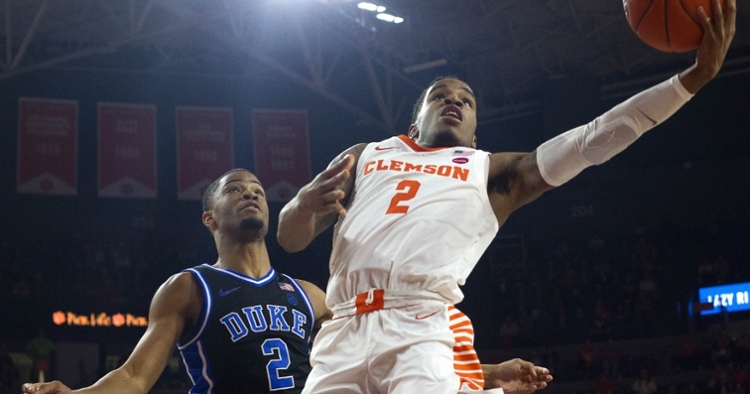 CLEMSON, S.C. – Fresh off a noteworthy win over the North Carolina Tar Heels, the Clemson University men's basketball team took down another Tobacco Road blue blood on Tuesday, as the Tigers upset No. 3 Duke. Clemson downed the Blue Devils 79-72 at Littlejohn Coliseum, leading to a court storming and marking the first time since the 1995-96 campaign that the Tigers defeated Duke and North Carolina in the same season. As a result of the victory, Clemson Head Coach Brad Brownell notched his 178th victory at the helm of the Tiger program, making him the all-time winningest head coach in Clemson men's basketball history.

Clemson (9-7, 3-3) controlled the pace of the game throughout, shooting 56.6 percent from the floor and forcing 15 turnovers. The Tigers outrebounded the Blue Devils (15-2, 5-1) 35-27 and also scored 38 points in the paint as compared to Duke's 34 points in the paint. Both teams knocked down eight 3-pointers and shot 50 percent from the free throw line, but Clemson was able to stave off Duke via its efficient shooting from the field.

Scoring a career-high 25 points on 10-of-15 shooting, Aamir Simms led Clemson by way of his 10-of-15 shooting performance. Simms connected on two 3-point shots and pulled down nine rebounds to go along with his five assists. Tevin Mack matched his season high with 22 points on 10-of-14 shooting. Mack sank a pair of 3-balls and corralled nine rebounds, as well. In addition to solid spot-up shooting, Mack consistently got to the basket for pivotal layups. John Newman III tabbed 14 points on 5-of-7 shooting. Newman excelled on defense, too, recording four steals and two blocks, both of which are career-best marks. Vernon Carey Jr. paced Duke with 20 points on 8-of-14 shooting.

In the first half, Clemson fell down 4-0 but raced to a 40-33 lead at halftime. The Tigers shot the ball at a percentage of 57.7 over the course of the first 20 minutes of action and forced nine turnovers on the defensive end. Clemson led by as many as nine points in the first half, which was highlighted by Newman throwing down a thunderous, posterizing dunk at the 8:18 mark. That emphatic slam was part of a 6-0 run that Newman singlehandedly put together, as he made a 3-pointer the next time down the floor.

Duke cut into Clemson's lead at the start of the second half, but the Tigers regained the momentum with a 7-0 run that culminated in Clemson going up 49-40 at the 16:46 mark. The Blue Devils were able to erase that deficit and eventually led by three points in the second half. After Duke garnered a 62-59 advantage with 6:36 remaining, the Tigers outscored the Blue Devils 20-10 the rest of the way. Newman effectively iced the game when he put Clemson up by eight points via a corner trey just under the 2-minute mark, and the Tigers held the Blue Devils at bay in the game's final moments.

Once the final buzzer sounded in Clemson's 79-72 triumph, the exuberant Clemson students celebrated by storming the court. The Tigers defeated the Tar Heels and the Blue Devils in back-to-back games for the first time since the 1989-90 season, and Clemson will look to build off that impressive stretch moving forward. Also of note, the No. 3 Blue Devils are the highest-ranked team to be beaten by a Brownell-coached Clemson squad.

Next up for the Tigers is a matchup against the NC State Wolfpack (11-5, 2-3) at PNC Arena on Saturday, Jan. 18. Clemson previously defeated NC State 81-70 at Littlejohn on Saturday, Jan. 4. The contest in Raleigh, N.C., is slated to tip off at 2 p.m. and will air on a regional sports network (RSN).

On becoming the all-time wins leader at Clemson:

“I’m honored to be the winningest coach at Clemson, but that’s the result of a lot of hard work from a lot of people. I’ve coached a lot of great players here, kids that have given a lot to our program and have had some terrific assistant coaches that have worked with me. It’s more of a program deal than me, but what I’m excited about is that I’ve been at Clemson for 10 years. I enjoy it here, my girls go to school here, I love Clemson, I love being a head coach here and competing in the ACC. I’m very, very grateful for that and humbled because there have been a lot of really good coaches that have coached here. To be here as long as I have and to compete in this league, that’s something I’m really proud of.”?

On the performances of Simms and Mack:

“Our guys did a lot of great things throughout the game, offensively, defensively, the confidence, the playmaking at the end, Aamir (Simms) and Tevin (Mack) were terrific. He’s (Aamir Simms) getting better, and more confident as we move throughout the season. He didn’t have the best start to the season, but the last few games he has really come on for us.”

On the crowd and the momentum it created:

“The crowd helped today, when you have this kind of environment, our guys were so pumped up before the game to go out there and play. I was trying to keep them calm and told them this game is more about execution, and we executed really well tonight.

On the recent run of outstanding play:

“We came back from Christmas with good attitudes, and these kids have done a remarkable job coming back with a great work attitude and ready to go.”

On the impact of Tyson and Scott off the bench:

“Both those guys (Hunter Tyson and Curran Scott) have really raised their level of play the last few games. Both those guys can score and make some plays for us. Clyde Trapp since coming back has really helped with experience and has been the guy making plays at the end of games recently.”

“It just shows what our Clemson family is about.” ?@ClemsonMBB’s Aamir Simms joined @TheAndyKatz after dropping a career-high 25pts in the win over No. 3 Duke! #ClemsonGRIT pic.twitter.com/BZ5ptSge20

Coach K reacts to the loss at Clemson pic.twitter.com/3UUGkdyMGd

Clemson vs Duke Box Score
ONE DAY ONLY! Fanatics.com Black Friday Sale 20% off on orders over $75
Comment on this story