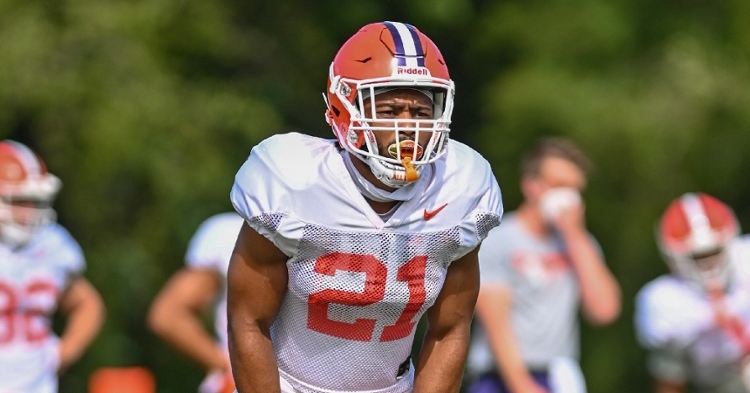 Rencher says they would not be on social media ahead of game weekends (Clemson athletics photo).

Times have changed and that necessitated an update in how Clemson football treats social media, Tigers running back Darien Rencher said Monday.

Rencher has been instrumental in a couple key social movements this offseason and social media has been a large part of that.

From early on in the Dabo Swinney era until last season, players had voted to stay off of social media at the start of camp until December. This year, Rencher and Trevor Lawrence have used the platforms in a last-ditch effort to save the fall football season.

"It was God's timing," Rencher said via Zoom Monday. "Every senior class -- never really been coach Swinney's thing -- going back to 2012-2013, the senior class (has voted to stay off of social media in-season) -- it was different back then. I think they had Blackberry's and flip phones. They decided to get off of Facebook or whatever social media was then. Ever since then -- at Clemson we're about less is more and to limit distractions, but I think as times have changed and players have grown up in this social media era -- we think we can handle it."

Rencher says it all came together and they were still going to have certain limits to social media use during the season.

"We created like a new social media policy that coach Swinney let us vote on that we will still limit distractions on gameday and a day before gameday, and honestly seeing the timing of it -- it's just God's plan," the fifth-year senior said. "It really wasn't a focus of doing (coordinated social media campaigns) -- it all came together timely. This is the first year in a long time that we were going to have social media during the season and it's been powerful to have it in this moment and time."