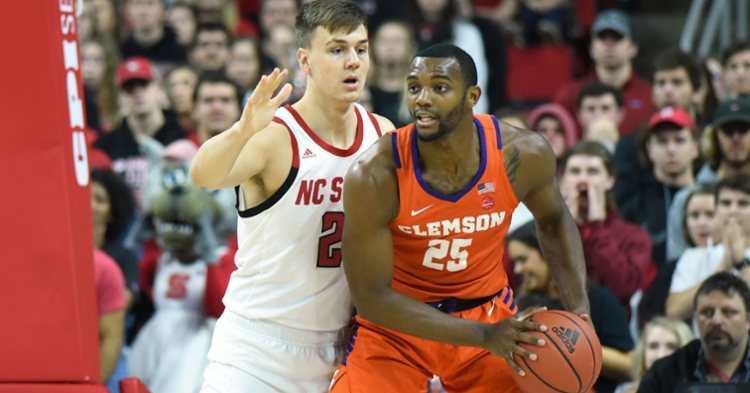 RALEIGH, N.C. — In a game of runs, the Clemson University men's basketball fell to NC State on Saturday. The Tigers entered the contest having won three games in a row over Triangle blue bloods, including a home victory over the Wolfpack earlier in the month, but that streak ended by way of a 60-54 loss at PNC Arena.

Clemson (9-8, 3-4) previously defeated NC State (13-5, 4-3) 81-70 at Littlejohn Coliseum on Saturday, Jan. 4., and the Tigers put together a valiant comeback effort late in Saturday's loss. Clemson limited NC State to just 39.2 percent from the floor while Clemson produced a 37.7-percent shooting performance. The Tigers were 5-of-20 on 3-point attempts and 9-of-23 on free throw attempts. The Wolfpack, meanwhile, went 6-for-25 on 3-pointers and 14-for-21 at the charity stripe. NC State used a few sizable runs and 17 points off turnovers to come out on top, though. Clemson recorded seven steals on the afternoon and tallied 15 points off the bench.

Continuing with the theme of his recent performances, Aamir Simms led the way for the Tigers. The big man led all scorers with 18 points to go along with his 11 rebounds as part of Simms' third career double-double. Simms also knocked down a pair of 3-balls. Tevin Mack chipped in 12 points for the Tigers and corralled six boards, as well.

After falling down 5-0 early on, Clemson surged to an 11-5 lead, with 10 of those 11 points being scored by Simms, who tabbed 12 points in the first half. That eventually stretched into a 15-3 run for the Tigers, but NC State responded with an 11-1 run of its own that culminated in the Wolfpack leading 19-16 with eight minutes remaining in the half. NC State shot 50 percent from the field in the first half and led 36-24 at the intermission.

Following halftime, John Newman III sparked Clemson with a couple of jump shots, including a 3-ball, to cut the Tigers' deficit to seven points. An 11-0 NC State run ensued, though, resulting in the Wolfpack building up an 18-point advantage, which was the largest lead of the game by either team. True to form, the Tigers did not give in, and a 12-2 run pulled Clemson to within eight points of NC State with under seven minutes to play. Eventually, a pivotal 3-pointer by NC State's Braxton Beverly placed the Wolfpack ahead by nine points with 47 seconds left, and Clemson ended up falling 60-54.

The Tigers will return home to take on the Wake Forest Demon Deacons (8-8, 1-5) in their next outing on Tuesday, Jan. 21. Clemson and Wake Forest will square off at Littlejohn Coliseum in Clemson, S.C., for the first of two scheduled meetings between the two teams this season. Set to tip off at 8 p.m., the contest is slated to be broadcast on ACC Network.

"Defensively, we played well enough to win. If you had told me we were going to hold NC State to 39 percent shooting, limit them to seven offensive rebounds and force them to commit 13 turnovers, I would've felt pretty good about it."

"It's hard to win when you go 9-for-23 at the free throw line. It's puts too much pressure on you. We've got to finish more plays. We had a chance late. If you're going to win these games, you have to make some of those."

"To guard NC State like that was outstanding. Our kids were trying so hard and fighting on every play."

On Chase Hunter's return to action:

"His on-ball defense is really high-level. He gets over screens better than anybody on the team. He was good today, defensively. I was really pleased. He started practicing a couple of days ago. He's been getting the itch to come back. It was great to see him out there."

Clemson vs NC State Box Score
Get the All-New Clemson Nike Shoe before it sells out!
Comment on this story