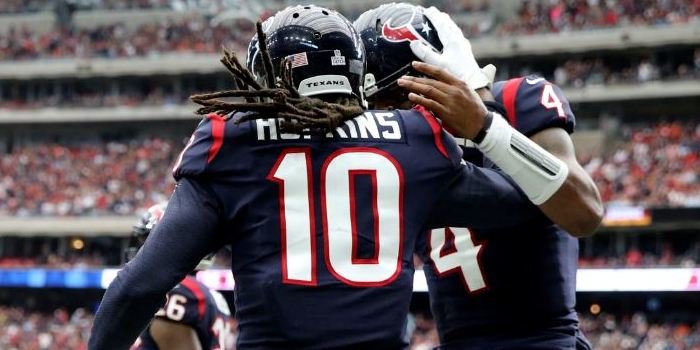 Deshaun Watson has connected with DeAndre Hopkins for a league-leading seven TDs.

Fellow former Tiger Deshaun Watson is tied for the league-lead in touchdown passes (19) with two of his receivers tied atop the NFL in touchdown receptions, in Hopkins and Will Fuller (7).

The Central native ranks second in yards per game (86.6) after his second-highest career receiving total Sunday at Seattle, with eight catches for 224 yards (238 yards versus Tennessee in 2014 his top mark).

"He's a great player," Texans coach Bill O'Brien told reporters after a 41-38 loss to the Seahawks Sunday. "He's one of the best receivers in the league. You guys have seen it for a long time. He's a competitor. We try and get the ball in his hand as much as possible.”

Mired with QB issues last season, Hopkins averaged 60 receiving yards a game with only four total touchdowns. He said Sunday Watson “is making throws I haven’t seen,” adding he didn’t find any solace in a big game because of the loss.

"You have to thank No. 4 for putting the ball in my hands, giving me a chance to make plays and the coaches for calling the plays," Hopkins said. "We didn't get the results we want, so for me it's not a moral victory at all. I would rather have zero yards and get a win, than have 300 yards and lose."

On a tough day for the defense, D.J. Reader posted six tackles (two solo) with one for loss. Safety Marcus Gilchrist accounted for three solo stops.

Quick hits Grady Jarrett put a strong effort in a 25-20 win over the New York Jets, tallying seven tackles (four solo) with two for loss. Vic Beasley added one stop. Jets kicker Chandler Catanzaro struggled going 2-of-4 on field goal attempts in the close loss…Mike Williams registered his second career catch, going seven yards with two total targets in a loss at New England…Colts DB T.J. Green posted four solo tackles in a 24-23 road loss at Cincinnati…Vikings DB Mackensie Alexander put up two tackles and Jayron Kearse, one, in a 33-16 win over Cleveland…Bucs receiver Adam Humphries was targeted six times with four catches for 26 yards in a 17-3 home loss to Carolina…Andre Branch was inactive (groin) for a 40-0 loss at Baltimore last Thursday. Rookie cornerback Cordrea Tankersley added one tackle…Redskins DB Bashaud Breeland was on the inactive list for their game with the Cowboys…49ers punter Bradley Pinion averaged 45.5 yards on eight punts, landing two inside the 20, in a 33-10 loss to Philadelphia.

The @AtlantaFalcons snapped their losing streak in New York today. Get on the team plane ride home with DT @GradyJarrett. #RiseUp #ATLvsNYJ pic.twitter.com/ZY4wFyBgcp