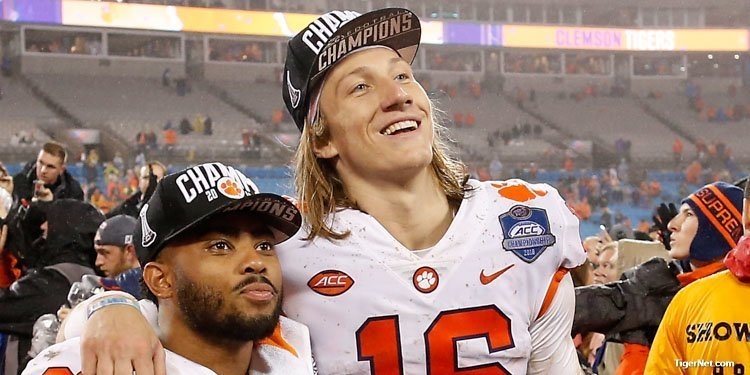 Trevor Lawrence and Clemson have had a lot to smile about since he took over the starting role during the season.

The stars will be out no matter the weather in Santa Clara, California during the national championship between No. 1 Alabama and No. 2 Clemson Monday (8 p.m. ET/ESPN).

The elite level of production from the underclassmen quarterbacks headline the matchup.

Pro Football Focus grades both in the top-10 nationally overall with Alabama sophomore Tua Tagovailoa ranking No. 4 (91.3) and Clemson freshman Trevor Lawrence checking in at No. 9 (90.5).

His mutual relationship with a number of talented top Tide receivers only makes the offense more lethal, with six receivers averaging double-digit yards per target (Clemson has one in Justyn Ross, 13.7).

“He (Tagovailoa) looked like he was healthy again after a rough SEC Championship...I know Oklahoma’s defense is not good,” Pro Football Focus’ Steve Palazzolo said, “but when you have tight-window throws - you still have to make them and Tua made a number of throws with exceptionable accuracy. This quarterback matchup (in the national championship) is as good as it gets in college football.”

“(Alabama) has five legit weapons (at receiver) going against Clemson...I just don’t know how you cover these Alabama receivers. Clemson has a pretty good secondary that’s gotten better and better but they should be overmatched by what Alabama has.”

Lawrence, who's led Clemson to a 37-point average margin victory over the last nine games, was tabbed as the ACC Player of the Year by PFF and they were particularly impressed with the Cotton Bowl performance, where the Cartersville, Georgia product tossed three touchdown passes and totaled 327 passing yards.

"When you go back and watch that Notre Dame game, he just doesn't miss too many throws," said Palazzolo. "He makes a few spectacular throws and the worst throws he makes are the 50/50 balls that Justyn Ross and Tee Higgins can go up and get. He's pretty good at that 50/50 ball. Trevor Lawrence - a mistake-free true freshman year, pretty spectacular for a guy with such a big arm and the ability to get the ball down field."

"What Trevor Lawrence did against Notre Dame was unbelievable," said PFF's Mike Renner. "That offensive line did not play well. He was under as much pressure or more than Ian Book and he got rid of the ball quicker and was breaking tackles and getting outside the pocket and making plays. He just did not miss throws. When he had a throw that was open, he was hitting it. That's the biggest thing in college football. Guys miss a lot of throws that are open at this level and having a guy who doesn't is huge."

Trevor Lawrence has had an incredible first season for the Clemson Tigers. He faces his toughest test on Monday against Alabama.https://t.co/zZW10Eeps7 pic.twitter.com/pQScOUFtF2

CFB Film Room sees a mirror image between the two in adjusted completion percentage under pressure (59.3 for Lawrence; 59.4 for Tagovailoa) but Tagovailoa has averaged over a yard more per attempt (8.36 to 6.97) and has been sacked at a lower rate there as well (11.3 to 15.7 for Lawrence).

Speaking of sacks, a couple more individual stars to watch will be in the trenches.

PFF sees one of the bigger matchups being between Ted Hendricks Award winner Clelin Ferrell and Outland Trophy finalist and Alabama offensive tackle Jonah Williams. They have Williams as allowing only 11 pressures in 441 pass blocking snaps this season, holding a 88.6 pass-block grade, while Ferrell ranks ninth nationally among edge defenders in productivity (13 sacks/29 hurries/52 total pressures).

On the other side, Outland Trophy winner and redshirt sophomore Quinnen Williams will be hard to handle. The 6-foot-4 and 285-pound defensive tackle has seven sacks and 17 TFLs in his 66 stops this season. Clemson gave up a season-high five sacks to Alabama last season.

“That’s the biggest mismatch in this game is them being able to block Quinnen Williams,” said Renner. “You have to have a plan for Quinnen Williams. You can’t let him go single-block versus this Clemson offensive line. That’s not going to get the job done. He’s going to win every single time.”

More national leaders in this matchup:

(Stats per the NCAA)

This is part one of the Advanced Outlook for the matchup. Part two features the latest game projections and the overall areas to watch.

Trevor Lawrence and Tua Tagovailoa both put up strong numbers under pressure this season pic.twitter.com/KROX4lwJaW

Tua Tagovailoa's favorite target has been Jerry Jeudy at almost all levels of the field pic.twitter.com/qVEc3IYZkY