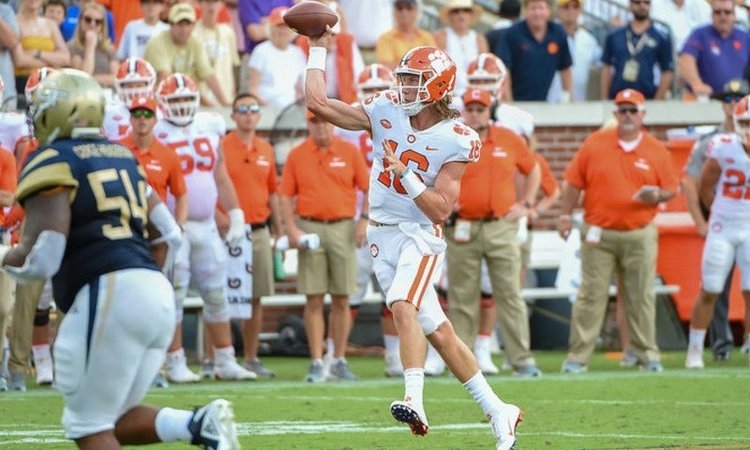 Trevor Lawrence took hold of the starting QB role last year in Atlanta and should build on his legacy in the opener.

A week out from the opener, Dabo Swinney's Tigers are a 36-point favorite over cross-division rival Georgia Tech.

That doesn't translate to much intrigue over the outcome under the Death Valley lights on Aug. 29 (8 p.m./ACC Network) but the offensive overhaul underway at Georgia Tech does pique some interest.

Gone is Paul Johnson's triple-option-heavy spread option and now featuring on The Flats is a spread offense out of the shotgun.

Looking at the 2018 numbers and 2019 projections, it's clear to see why Clemson is an over five-touchdown favorite in a conference game:

While this season of transition may sting, Georgia Tech had to change something to achieve any level of success versus Clemson offensively.

Over the last four seasons, the Yellow Jackets averaged over 170 yards less per game versus the Tigers than the rest of their schedule, posting only 127.5 rushing yards a contest from the run-centered offense. Georgia Tech only entered the Clemson red zone seven times and scored four touchdowns in those trips over that stretch.

Patenaude has the reputation of molding the offense to personnel, as most coaches do initially, so despite more receivers being on the field -- the run game should still be a fixture of the Yellow Jackets' scheme. His Temple offense set a school scoring record last season (up 9.8 points per game from 2017 to 2018) with a group rated 50th in success rate* and 67th in explosiveness^ with a balanced attack (runs on 53 percent of plays). With any offense of this type these days, a decent amount of those pass/run calls fall on the quarterback's read of the defense in run-pass option plays.

Collins has mentioned a hurry-up element to the offense as well but that may be one they play by ear. Temple ranked 44th in plays per game versus FBS opponents last season (74.6; for reference, Clemson ranked 57th with 73), which was only slightly up from the 2017 campaign (72.7).

Temple's top-15 rank in adjusted sack rate last season speaks to what you should expect come Thursday, a quick-passing game that attempts to limit the impact of Clemson's pass rush and move the ball down the field. The Owls rated in the top-35 nationally in pass efficiency last season (33rd in S&P+) but 80th in explosiveness. On blitzing downs, they were hit-and-miss with a No. 71 ranking in success rate (28.5) and a top-15 big-play rate (14th; 11.5).

As in most offenses, the quarterback holds the key and former 3-star dual-threat QB prospect Lucas Johnson (6-3 215) looks to be the favorite to take the helm in year one, coming off of sitting out the 2018 campaign with a foot injury. He hasn't attempted a pass in college game yet but tossed for over 2,500 yards with 26 touchdowns as a senior at Mount Carmel (Ca.) in 2015. 2018 backup Tobias Oliver is also in the mix after completing seven of his 16 throws last season (two touchdowns, no interceptions).

The offensive changes grab the headlines but a defense that ranked 100th in efficiency -- and replacing its top-four tacklers on the D-line and its top-three leading tacklers overall -- will likely most determine Clemson's margin of victory under the lights. Georgia Tech has cycled through its defensive formations under different coordinators lately and will likely feature a four lineman formation this season with some multiple looks.

Clemson QB Trevor Lawrence essentially earned the starting job last year in Atlanta, going 13-of-18 passing for 176 yards and four touchdowns to one interception in a 49-21 win over the Yellow Jackets. ACC player of the year Travis Etienne only needed 11 carries to tally 122 yards with a score.

More adjusted to the No. 1 role, Lawrence topped the 250-yard passing mark seven of his final nine games last season (including averaging 337 yards in Playoff wins over Notre Dame and Alabama) -- and that's more of the stat-line you should expect from Lawrence here in a comfortable win. Just where Clemson is on defense and Georgia Tech on offense in their respective overhauls probably determines where the final score falls in line late with Vegas and analytic expectations on Thursday.

(* Success rate is determined by gaining 50 percent of the necessary yardage on first down, 70 percent on second down and 100 percent on third and fourth down.

^ Based on Football Outsiders' IsoPPP metric, which is defined as looking at only the per-play value of a team's successful plays to separate the explosiveness component from the efficiency component.)