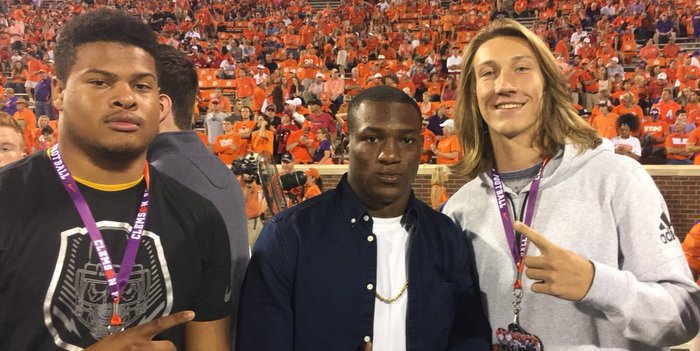 Clemson head coach Dabo Swinney has repeatedly said that he wants 70,000-plus fans to pack Death Valley for Saturday’s Orange & White Game, and while his motivation is to create a game-like atmosphere, it also wouldn’t hurt to have a packed house with some of the nation’s top talent converging on Memorial Stadium.

The spring game is the last opportunity for Clemson to make an impression on its top prospects and commits until Swinney’s football camps in June, the coaches will have their work cut out for them with the nation’s No. 1 player and No. 1 running back in town.

All signs point to Laurinburg (NC) Scotland County 5-star running back Zamir White (nickname of Zeus) making a trip to Clemson this weekend with his mother. It can’t be overstated how big this visit is for Clemson with White’s commitment looming on June 27th.

White and his mother attended the Louisville game last season, but we’re late arriving and didn’t get to spend a lot of time with the coaching staff, so this is their chance to leave a lasting impression.

Bradenton (FL) IMG defensive end Xavier Thomas, the No. 1 recruit in the country, will make the trip with teammate and Clemson linebacker commit Mike Jones. Thomas was on campus in January for Clemson’s elite junior day, and then the IMG bus tour stopped by last month. Thomas attended South Carolina’s spring game last week, so this is a chance for Clemson to show the difference in the two programs.

Darnell Jeffries – the 3-star Covington (GA) Newton defensive tackle – will be making his fourth trip in the last month to Clemson. Jeffries seems to find his way on campus whenever he can. Could Clemson add a commitment this weekend?

Cypress (TX) Cypress Springs 4-star safety Leon O’Neal – who has offers from just about every prominent school in the country – will also be in attendance. Clemson made O’Neal’s recently released top-12.

The other top 2018 target expected to be on hand is newly offered Seneca (SC) tight end Braden Galloway.