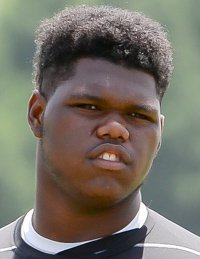 Defensive Tackle
B I O
A national top 100 player by ESPN.com, he ranks No. 88 nationally, second in the state of South Carolina and the fifth best defensive tackle in the nation by that website…rated No. 139 nationally by Rivals.com, who see Belk as third best player in the state and 11th best defensive tackle in the nation…played defensive tackle for Lewisville High School where he helped team to a 9-4 season and the third round of playoffs…All-Regional and All-State by High School Sports Report (for all classes) and Coaches Class A All-State…finished the year with 116 tackles, 34 tackles for loss, 11 sacks, seven caused fumbles, a recovered fumble and a pass deflection…probably had best game against Lamar with 10 tackles and three tackles for loss…named to the U.S. Army All-American Game…played his high school football at Lewisville for Will Mitchell…comes to Clemson from the same school that sent former Clemson All-ACC running back Wesley McFadden and former Clemson and NFL linebacker Michael Barber to Clemson…lettered in basketball as a freshman and sophomore…committed to the Tigers on 01/29/2017…recruited by Jeff Scott and Todd Bates.

He has benched pressed 355 pounds and squatted 400 pounds.