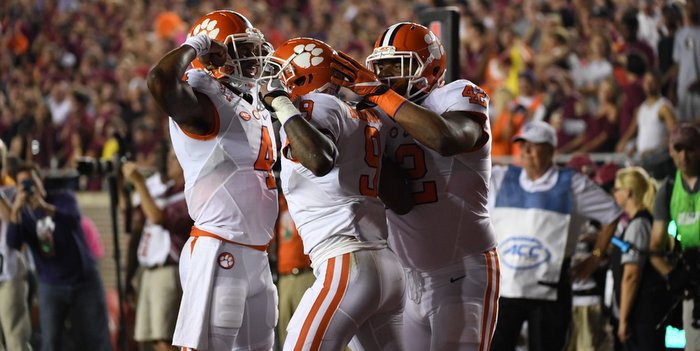 CLEMSON – Clemson escaped Doak Campbell Stadium with a thrilling 37-34 victory over Florida State Saturday night because they have talented players, but Dabo Swinney said when the game was on the line it came down to heart and toughness.

The Tigers have found themselves with their backs against the wall time and time again in 2016, but somehow find a way to win each and every time, and Swinney said watching the film was just as fun as being at the game in person.

“What a fun tape to grade. Big, big win obviously. I'm proud of our guys for a critical, hard-fought game. Both teams played with a great will to win,” Swinney said. “Again, for our guys to overcome adversity and find a way to win at their place, it's something pretty special. Still, a lot of room for improvement and things we can coach from. I can't say enough about the heart and toughness these guys have. They just find ways to win games in difficult situations.”

Clemson’s defense didn’t play its best game, allowing Dalvin Cook to break through for three long runs, but when it counted most they got the stops to seal Clemson’s first win in Tallahassee in 10 years.

“Defensively, I thought they played hard. The biggest issue was three long runs. We just didn't set the edge,” Swinney said. “We got a little thick and heavy; we didn't set the edge on the perimeter and boy you have to do that against those backs. Let No. 4 get around the edge and he can take it to the house. Outside of that, we did well against the run all night. We were fortunate to overcome it. The penalties cost us, too, obviously. The last stop to win it was awesome. Their quarterback was less than 50-percent. They punted several times. A lot of room for improvement, though.”

The Tigers cleaned up a lot of the miscues they’ve had in recent weeks – dropped passes and fumbles – but two costly turnovers allowed Florida State to stay in the game. However, in the fourth quarter Deshaun Watson orchestrated two critical touchdown drives.

“Offensively, again, 511 yards of offense. We threw for 378 yards. A lot of good things,” he said. “Clutch drives, we got back on track in the red zone – 5-of-5. We didn't fumble the ball, which was a big emphasis. Obviously, Deshaun Watson had two interceptions. The line played really hard. They did give up one sack. One was on the line, and three were not. We missed some opportunities in the game for sure. We had some critical penalties, mental errors, some busts, but when we had to have it, we got it.”

And, once again, Clemson’s attention to special teams in the offseason and in practice is showing on the field.

“Special teams it was one of our best games. We made the difference in special teams,” he said. “Our protection was tremendous. We pinned them inside the 20 twice. Our kickoff coverage team was awesome. Just tremendous. Just pleased with what we're doing in that area. We're happy to be 8-0. Syracuse has had an open date, so they've had extra time to prepare for us.”

“Wayne Gallman played tremendous. He probably had his best grade,” he said. “I thought the receivers played well. They did their job. They made a lot of big plays. Tyrone Crowder played very well. Justin Falcinelli played well. Sean Pollard came in there and got some valuable experience. We played nine offensive linemen. Austin Bryant, Clelin Ferrell and Christian Wilkins played very well. Christian got a little thick in there one time on the counter play, but those guys played great all night. Dexter Lawrence was disruptive inside. He is a load. He made his presence known. Ben Boulware and Kendall Joseph did well. Deon Cain had two of the biggest plays of the night. Hunter Renfrow had some big plays as well. A lot of good contributions.”

“Players of the game were Jordan Leggett, Clelin Ferrell and then on special teams it was Chad Smith and Greg Huegel.”

“Injury-wise, we came through it pretty good. Marcus Edmond's toe was bothering him. Travyon Mullen rolled his ankle on the first kickoff. Jadar Johnson had a little (lower) leg strain. None seem to appear to be serious. We'll evaluate them tomorrow.

“I don't anticipate that (anyone to miss Saturday’s game against Syracuse). We'll evaluate them. We didn't get back until 6 a.m. this morning, so I have not seen them today. They've got their treatment. We expect all those guys to be ready to go.”

On the pass interference penalties

“Just a lot of competitive plays. We knew they were going to take a lot of shots. There were a lot of bang-bang plays. We were in position and made some. We just need to clean up some of our technique. I think they called five pass interferences on us. Disappointed in the big plays and penalties, because those things kept them in the game. We just have to do a better job of cleaning up technique and winning more competitive plays. Some go against you, some go for you.”

On his confidence in Huegel

“We haven't had to kick many long field goals this year. We've moved the ball quite well. He's very capable. He's probably 54, maybe that's his top end (range). I'm proud of him. It's great to have a guy back who is experienced now. He's also done an excellent job with his kickoffs. He's having a good year.”

“They're going to be a big challenge. We've never played anyone who plays as fast as they do. They are playing with a lot of confidence offensively. They have a million run-pass options built into what they do. They have a true identity and they believe in what they're doing. Defensively, they have improved all year long. Lot of movement. They're rarely sitting in one spot. We expect them to be a big challenge for us. I'm glad they're here in Death Valley.”