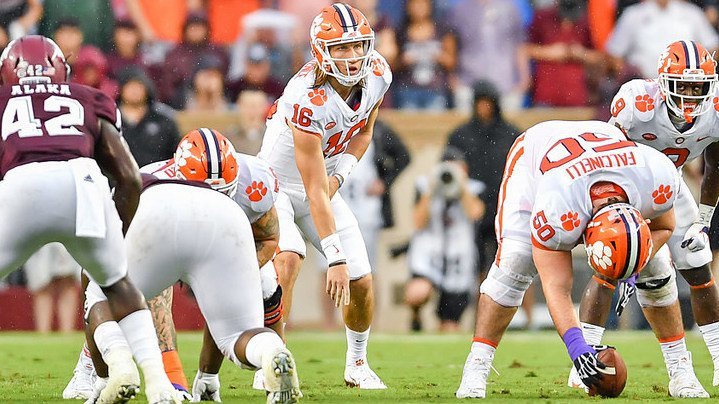 Trevor Lawrence checks into a play Saturday at Texas A&M

Trevor Lawrence showed his maturity Saturday night at Texas A&M, but it didn’t manifest itself to the media until after the game was over and most of the fans were long gone from Kyle Field.

Lawrence walked out of the Clemson locker room to face the media, and with different reporters looking for any kind of angle that would make for a catchy headline or story, he kept his composure. Lawrence was peppered with question after question after sharing snaps with starter Kelly Bryant and the quarterback competition.

Bryant had the best passing game of his career, going 12-of-17 for 205 yards (a 12.1 average) and a TD. He tacked on 14 non-sack runs for 62 yards, and after Lawrence played the first two series of the second half, Bryant led the Tigers on two scoring drives and finished out the game.

Lawrence wasn’t shabby - the offense averaged 18 yards on the five drives he led at Kyle Field. Aside from his 64-yard touchdown throw to Tee Higgins, Lawrence was 4-of-8 for 29 yards, with two runs for one yard.

“I felt really good about that first play. Tee made a great run after the catch. It was awesome,” Lawrence said. “There are probably a few plays where I could have hung in the pocket a little longer and made a throw instead of scrambling. Other than that I think I played decently. A few miscommunications here and there but other than that I think it was alright.”

He admitted that being a part of quarterback rotation is something new.

Still, the questions came from those who wanted the freshman to say something inflammatory, but he kept his cool and gave the answer of the night – he wants to win more than he wants to play.

“I will leave that up to the coaches and let them figure out what they want to do each week. I am going to keep playing when my number is called,” Lawrence said. “There is definitely not anything between me and Kelly. We roomed together last night and we have a really good relationship. We are going to keep encouraging each other and playing well when each of us are in. It's no different than rooming with anyone else. It's never gonna be that I want to play more than I want this team to win. That is how we both feel about it. We help each other out.”

“Trevor is incredibly mature. He was that way in the recruiting process. He committed in December of his junior year and I’d call him and text him and he’d be like, ‘Coach, you don’t have to call me every week. You don’t have to text me. I’m good.’ He just wasn’t into it,” Swinney said Wednesday. “He was just very mature and very laid back. He was never distracted. That’s just who he is. He looks like drama. He looks like Hollywood and kind of has that persona with that flow he’s got going, but he’s really not. He’s just simple and easy and incredibly focused. It’s fun.”

As Bryant led the Tigers to the win, Lawrence could be seen cheering on his senior teammate and was one of the first to offer congratulations when Bryant left the field.

“I was definitely happy. In the first half, neither one of us got a good rhythm going,” Lawrence said. “The second half we came out there and had some miscommunications and he had two good series in a row and got some rhythm and I was glad to see him lead us to a win right there.”