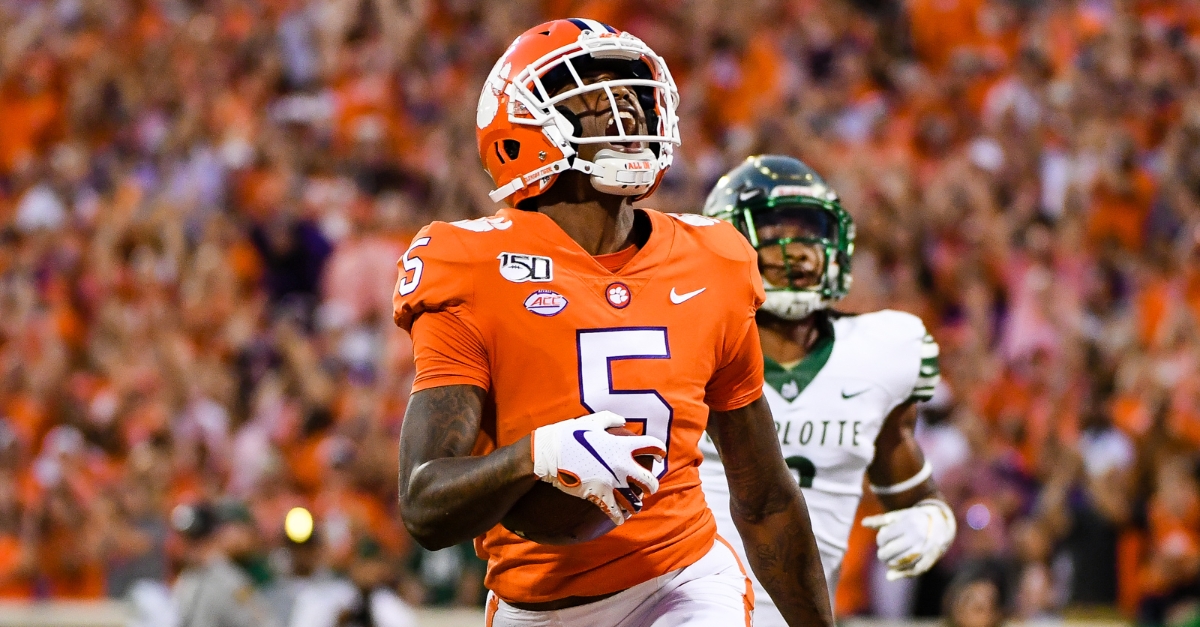 Tee Higgins scores on the second play of the game.

CLEMSON – The loudest cheers of the night were saved for the Disney camera crew shooting a movie about former Tiger Ray Ray McElrathbey.

Top-ranked Clemson scored early and often and went deep into the bench as early as the second quarter en route to a 52-10 plastering of C-USA foe Charlotte in Death Valley Saturday evening. Clemson improves to 4-0 with the win and Charlotte falls to 2-2. The game was the 150th of head coach Dabo Swinney’s career and the Tigers are 120-30 in those 150 games.

Clemson is in the midst of a school-record 19-game winning streak dating to the 2018 season opener. Clemson won its 14th consecutive game by 14 points or more, tied for the third-longest streak in the AP Poll era (since 1936).

Clemson accumulated 466 total yards - 231 yards through the air and 235 yards on the ground.

Starting quarterback Trevor Lawrence played a quarter-and-a-half, completing 7-of-9 passes for 94 yards and two touchdowns. Travis Etienne carried the ball 11 times for 61 yards and a score in limited duty.

The Tigers forced a 3-and-out by Charlotte on the game’s first series and it took just two plays for Clemson to score after the punt. Etienne ran off tackle for a yard on the first play but Lawrence dialed up Tee Higgins on the second play. Higgins broke free down the left seam and took in Lawrence’s throw for a 58-yard scoring play. Early in the first quarter Clemson led 7-0. 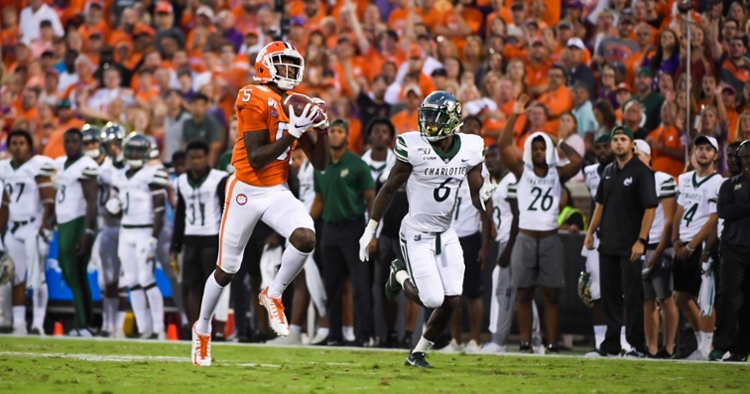 Tee Higgins scores on the second play of the game. "

The 49ers picked up two first downs on the ensuing drive but K’von Wallace stepped in front of a throw by quarterback Chris Reynolds at the Clemson 34-yard line and raced 66 yards for the pick-six. It was the first interception return for a touchdown in Wallace’s career and Clemson led 14-0 with 10:24 to play in the first quarter.

The defense forced another punt by the 49ers and the Tigers put together a 9-play, 59-yard drive that ended with a 22-yard B.T. Potter field goal. With 5:03 to play in the first quarter, Clemson led 17-0.

The Clemson defense continued to stymie the 49er offense and an eight-play, 60-yard drive ended with a two-yard scoring toss from Lawrence to Cornell Powell for a 24-0 lead. The 49ers pushed the ball near midfield on the ensuing drive and went for it on 4th-and-3 at their own 49. The play was stuffed for no gain and Chase Brice replaced Lawrence at quarterback.

Nine plays later Etienne rumbled in from two yards out and Clemson led 31-0 midway through the second quarter. The 49ers got on the board with a 24-yard field goal from Jonathan Cruz at the 4:27 mark, and Clemson led 31-3 late in the first half.

Clemson ended the first half with a 7-play, 69-yard drive that ended with an acrobatic vault from Lyn-J-Dixon from one yard out, and the Tigers took a 38-3 lead into the break.

The teams traded punts to begin the second half, but Brice and Joseph Ngata took the top off of the defense on the Tigers’ second drive. On the third play of the drive, Brice floated a pass over the top to Ngata, who gathered the ball in at the 10 and raced into the end zone to complete the 37-yard score. The touchdown was the first of Ngata’s career and Clemson led 45-3 with 9:51 to play in the third quarter.

The 49ers were once again forced to punt but returner Will Swinney opted to forego the fair catch and was run over after the ball hit his hands. The 49ers recovered the fumble and scored on a touchdown by Chris Reynolds a few plays later to make it 45-10 with just under five minutes to play in the third quarter.

The Tigers added a four-play, 65-yard scoring drive midway through the fourth quarter with freshman running back Mikey Dukes taking it the last 24 yards for the score. With 6:12 to play Clemson led 52-10.

Clemson takes on North Carolina at 3:30 pm in Chapel Hill next Saturday. The Tar Heels opened the season with wins over South Carolina and Miami but have dropped two straight, including Saturday’s loss to Appalachian St.

Clemson vs Charlotte Box Score
Get the latest Clemson gear right here!
Comment on this story