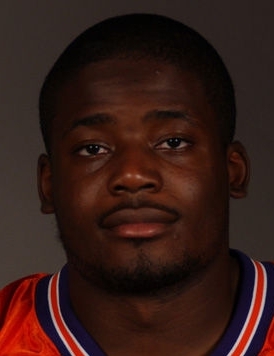 Running Back
B I O
Overview: Third-team running back behind James Davis and C.J. Spiller, both All-ACC backs...made the move to running back during practices for the 2006 Music City Bowl...had a solid spring with six carries for 62 yards in one scrimmage and 13 carries for 58 yards in the spring game...one of the more well-known college football players in 2006; he received national acclaim for his efforts that led to gaining custody of his 11-year-old (now 12) brother Fahmarr; they live in an off-campus apartment; NCAA granted him an exemption to the extra-benefits rule that allows Clemson coaches' families to help him care for Fahmarr when it comes to travel to school and other basic needs; he still has considerable responsibilities, including parent-teacher conferences at Edwards Middle School...NCAA allowed Clemson to establish a trust fund for Fahmarr at a local bank; the money provides for Fahmarr's basic needs...named Person-of-the-Week by ABC World News Tonight in September of 2006...in December, he was the recipient of the Keith Jackson Award of Excellence on the ESPN College Football All-America show...won the 2006 FedEx/FWAA Courage Award, an award he received at the 2007 Orange Bowl...his story has also been featured on ESPN GameDay, National Public Radio, ESPN.com, Oprah Winfrey Show, Hallmark Channel, New York Times, Sports Illustrated (twice), Denver Post, Dallas Morning News, and Philadelphia Inquirer...original story was authored by Larry Williams in Charleston Post & Courier...one of the nominees for Sports Illustrated Man-of-the-Year by one writer...has the third-best vertical jump on the team (38")...has the seventh-best broad jump (9'10")...has been clocked at 4.36 in the 40.

Before Clemson: Georgia North/South game participant...nation's #15 safety by CollegeFootballNews.com...#29 cornerback in the nation by SuperPrep and #32 cornerback by Scout.com...SuperPrep Dixie team member as the #28 prospect in Georgia...#29 athlete in the nation and #31 player in Georgia by Rivals.com...honorable mention all-state by Atlanta Constitution...coached by Durrell Caldwell at Mays High School...chose Clemson over Arkansas, Auburn, Florida, Georgia Tech, Minnesota, Tulane, and Vanderbilt...born Ramon D. McElrathbey on Sept. 26, 1986...majoring in sociology.