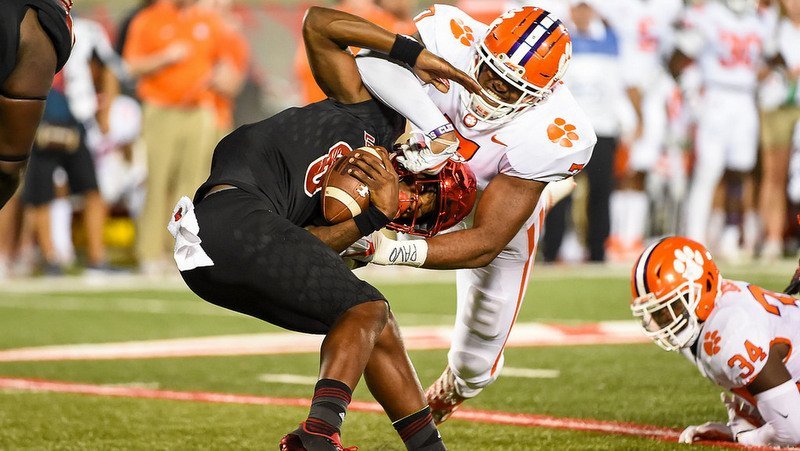 CLEMSON – While playing a 2-6 Louisville team might not be the most appealing game of the season, especially for students who are on Fall Break, Clemson head coach Dabo Swinney hopes to see a full student section at noon on Saturday.

No. 2 Clemson is set to square off with Louisville at noon in a game televised on ABC and Swinney said the Cardinals are the best 2-6 team he’s seen.

"I know we've got fall break. Hopefully, students will hang around and then cut out after Saturday. Our seniors cherish every single moment they get to play here at home. We're looking forward to a great day in the valley,” Swinney said during his weekly press conference Tuesday morning.

"Louisville is 2-6, but they're the best 2-6 team I've seen. Their record is not indicative of the players that they have. Their players are physical. It's as well a coordinated scheme as we've seen. They're big, huge, massive up front. They're as good a group of receivers as we've faced. They have a very effective tight end and two good backs. The biggest thing is they're 127th in the country in turnover margin. They've had some tough breaks. I'm sure that their coaches are frustrated

with a lot of missed opportunity, because they're capable of playing with anybody.

Swinney said Saturday’s game is extremely important as the Tigers enter the ‘Championship Phase’ of the season.

"Today will be a tough practice. With their style of play, you better have your mind right. I like where we are, though. We have a healthy team,” Swinney said. “We have a confident team. We have good momentum right now. We have great leadership and a team that is very, very focused. That serves us well as we enter what we call the championship phase of our journey. We're rolling into November. We're where we want to be. This phase of our season presents an opportunity for us but we have to put our best foot forward every week, a high sense of urgency and prepare with purpose. I have seen that in our guys."

"Physically, schematically and skill ... they have those things. They had a 24-20 game with BC in the fourth quarter. They should have won the Florida State game,” he said. “This offensive line, the quarterback, he's a young guy. They're committed to him and bringing him along. He runs well and he's big. He made eight big plays against Alabama. We expect a challenge and a big-time battle. We will have to play well defensively and have the right mindset to take on the scheme that they present. They take a bunch of shots down the field.

"They have a bunch of guys on their defensive line. Same thing. A good scheme and they're aggressive. This is not a 2-6 football team,” he said. “Their record is 2-6, but it's not indicative of the talent they have on this team. For us it's about being locked in. We want to play our best game every week. Last week was great, but can we clean up some of the mistakes from last week? Can we continue to win the turnover margin? Can we finish big plays? There are so many things that we have to focus on. We're excited to have an opportunity to play."

“Justyn Ross hurt his hamstring in practice. He was gimpy all week. He was able to go (against Florida State). He looked good last night. He got off to a good start last night. It wasn't so bad that he couldn't play but it was a problem for him. He continues to make big plays"

“Falcinell is back. He’s been cleared to participate from concussion protocol. He'll be in green today."

The status of redshirts

“The only one right now is K.J. Henry. We've used all four games on him. He's the only one that we know we're trying to hold and it's what he wants to do. We're in a position to do that. Everybody else is still in a good spot. I think we've gotten almost all of them in at least one game, I think. We'll see how it goes down the stretch. Where we are right now, we're in a good place with them."

On watching the playoff rankings

"We'll be in it. I know we'll be in it. I don't need to see a television show to know that. It's better that they wait to basically November. I said before the year that we were one of the 12-15 teams that have a shot. Some years things will go your way. Some years they won't. We're in a position. I'm sure we will be in there somewhere. It really does not matter to me right now. We have to beat Louisville. That's the only thing we are locked in on."

On keeping an eye on Alabama

"I keep an eye on everybody. I vote in the poll every week. I really do. Sometimes I call in at 3 in the morning. I actually call in and vote. I try to keep up with everybody. If I'm going to put my name on it, I should be informed. Alabama is pretty easy to keep up with. They're on the television every week and every night. Now Fresno State? That's more of a challenge."

"That's pretty amazing when you sit down and think about that tradition and all the players who have come through here. Players tell their kids and grandkids about that opportunity. Pretty cool."