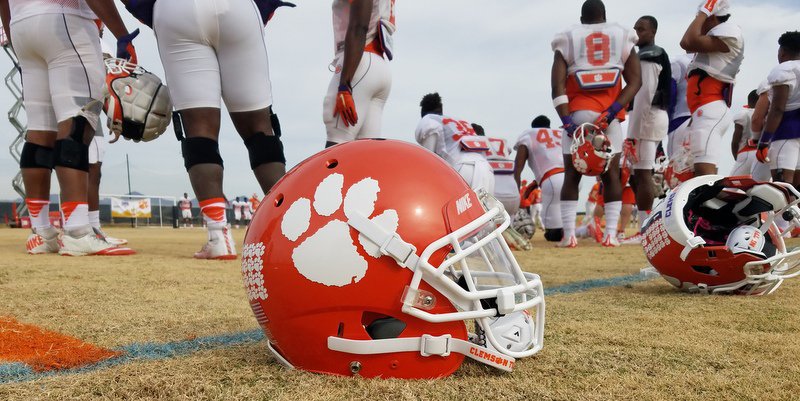 The upbeat song, along with a little help from senior linebacker Ben Boulware, provided just the spark the Tigers needed as they entered day two of Arizona bowl prep for Saturday’s Fiesta Bowl against Ohio St. The Tigers practiced for a little over two hours at Scottsdale Community College, the home of the Fighting Artichokes.

Boulware provided the first spark of the practice session as the Tigers ran through a fake punt drill. Boulware, on the punt return side of the ball, screamed at his fellow defenders because he didn’t think the play was being run the right way.

“We’ve been working on this for three damn weeks! Get it right,” he yelled. The tempo and urgency increased from there, and even though we were allowed just a few minutes inside the practice, we have a few observations and notes to pass along.

*Defensive tackle Scott Pagano jumped out right away to us. He is showing no ill effects from the foot injury he suffered last month. He was cutting and turning with no issues. Pagano will play a key role in stopping the middle run game of Ohio St.

Clemson head coach Dabo Swinney told us last week that he hates to compare players, but did so when he compared freshman defensive tackle Nyles Pinckney to former Tiger Grady Jarrett. It’s true – Pinckney gets low and comes up under the pads of the offensive linemen with great leverage. 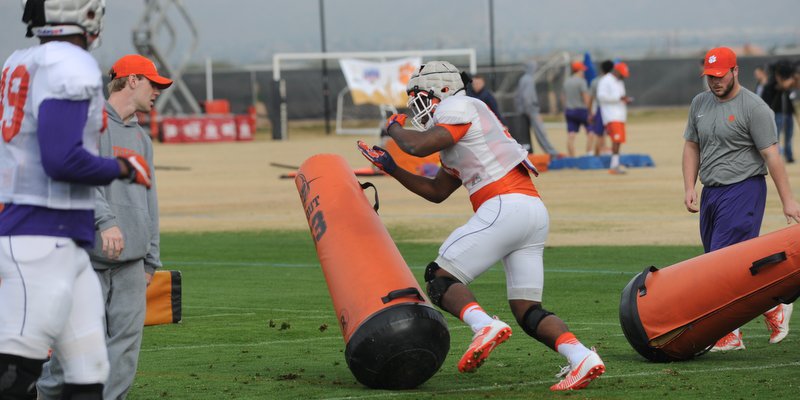 *We also watched the defensive ends for a few minutes, especially redshirt freshman Xavier Kelly. It seems like he puts on more muscle every time we see him, and Wednesday was no exception. Even though he has added muscle, it hasn’t affected the speed we saw in August camp before he had the moped wreck. He is explosive out of a stance or upright.

Lasamuel Davis….yes he needs to add a few more pounds but my hope is that it doesn’t affect his speed. He is lightning quick off the ball and has a great first step.

*We got a glimpse into what the future might hold at kick return with Tavien Feaster and Cornell Powell. While all eyes will be on Feaster next season, Powell just looks like a natural return man – he’s big, shifty, quick and can cut on a dime.

During the special teams portion of practice, Powell took a kickoff and when the hole looked like it was about to close, he did a quick crossover step and was gone again.

While Clemson’s special teams have improved this year, they’re still lacking pop in the return game, but that may not be the case next year.

*We were only allowed to watch a few quarterback drills, but each time I come away more and more impressed with Zerrick Cooper. First, the redshirt freshman just looks the part and certainly passes the eye test.

During drills, he exhibits the strongest arm of the group (not including Deshaun Watson) and throws a pretty jump ball to the corner of the endzone. Obviously, we don’t know what he’ll do when he’s faced with a live defense but the quarterback competition next spring is certainly going to fun to watch, if Watson decides to head to the NFL.

*ESPN’s Chris Fowler was a spectator at practice. He will call the game Saturday with former Ohio St. quarterback Kirk Herbstreit. Sam Ponder, who will be the sideline reporter for the game, was also in attendance.

*Rock/Paper/Scissors? The kid’s game was evident as the team stretched prior to practice, with several players going through the motions while they stretched. The next time we have availability with the players we will ask.

*Redshirt freshman Will Spiers has a strong leg. His dad, of course, is former Clemson punter Bill Spiers, who also just happened to play shortstop and had a nice career in the major leagues. Spiers booms the ball and has great hang time. I will be anxious to see where he’s at during the spring, but he could be a weapon next season.