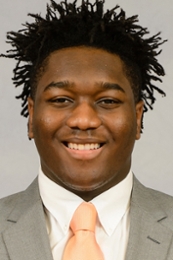 
2019: Third-team All-ACC selection … credited with 27 tackles (4.0 for loss), one sack and a fumble recovery in 367 snaps over 14 games (13 starts) … posted a sack vs. Georgia Tech … added three tackles vs. No. 12 Texas A&M … contributed two tackles at Syracuse … made one tackle vs. Charlotte and at North Carolina … posted seven tackles (1.5 for loss) and recovered a fumble in midair at Louisville, sharing team defensive player of the game honors … added two tackles (0.5 for loss) vs. Boston College … recorded three tackles for loss (0.5 for loss) vs. Wofford … posted two tackles at NC State … made four tackles vs. Wake Forest … contributed a tackle at South Carolina.


Before Clemson: Rated as high as the No. 79 prospect in the nation by Tom Lemming … rated as No. 196 prospect in the nation and the No. 2 overall prospect in South Carolina by Rivals … rated No. 261 in the nation and No. 4 player in South Carolina by ESPN … had outstanding senior year with 72 tackles, 20 tackles for loss, four sacks, six caused fumbles, three recovered fumbles, two blocked punts and two defensive touchdowns in 2015 … named the Beaufort Gazette’s All-Area Defensive Player of the Year … had 98 tackles, 27 for loss, nine sacks, blocked three field goals, 10 forced fumbles and eight fumble recoveries as a junior … had 91 tackles, 16 tackles for loss and seven sacks as a sophomore … narrowed his college choice to Clemson and South Carolina … played his high school football for Jerry Hatcher at Whale Branch High School … recruited by Tony Elliott and Dan Brooks.