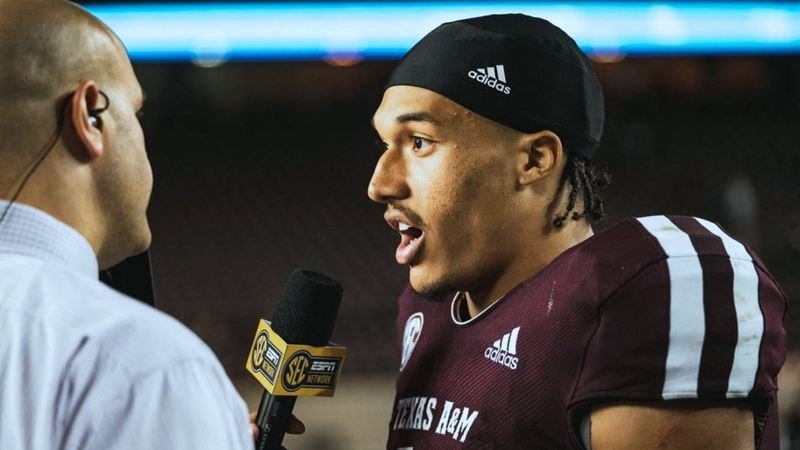 Kellen Mond after the Aggies' win in the season opener (Photo by Thomas Campbell, Texas A&M)

Texas A&M quarterback Kellen Mond will have the full attention of Clemson’s coaching staff this week, but the attention from the Clemson coaches is something Mond is used to. At one point during his recruitment, Mond considered attending Clemson and patterned his game after title-winning Tiger quarterback Deshaun Watson.

Mond is just as familiar with Clemson as the coaches are with him. Mond reached out to the Clemson coaching staff in early 2015 to register for head coach Dabo Swinney’s high school. Mond attended the camp in June and walked out with a Clemson offer from Brandon Streeter.

While Mond was on the Clemson campus, he met Tiger quarterback Deshaun Watson, who was still recovering from surgery to repair his torn ACL.

"I met him my sophomore year (of high school) when I visited over there," Mond told the media earlier this week. “He's a really good guy ... a great player that I always looked up to."

Mond stayed in contact with the Clemson coaches, but a few weeks following the Clemson visit Mond made an unofficial visit to Baylor and former Bear head coach Art Briles. The San Antonio native wanted to stay close to home and thought the high-flying Baylor offense was the perfect fit.

Clemson obtained commitments from two quarterback targets in December of 2015 – Chase Brice and Hunter Johnson – officially closing out the need for a quarterback in the 2017 recruiting cycle. Briles was fired in 2016, however, and Mond soon decommitted.

He committed to Texas A&M in June of 2016 and will start against the Tigers Saturday night. Watson now plays quarterback for the Houston Texans, just a few miles down the road from College Station, and Mond is still a big fan of Watson and the Tigers.

“I felt like I had a lot of respect for Coach Swinney and what he could do for the program. Deshaun Watson is obviously one of those guys who I idolized growing up,” Mond said. “Kind of a similar style of play, being able to extend plays with his athleticism but also with great accuracy. I always had respect for that program and what they can do, but I am never backing down from a challenge. They were number two on my list behind Baylor my sophomore year, so definitely a school I could have gone to.”

“I'd be all for that. Kellen works hard, and he models his game after him. When you model your game after someone - a coach or a player - you have to be yourself with the intangibles that make you successful,” Fisher said. “What makes Deshaun successful in the few times I've been around him - he's a quality young man, he's intelligent, studies the game, he's a great leader. All of those are great qualities of successful people. That would be a great guy to study, there's no doubt about it.”