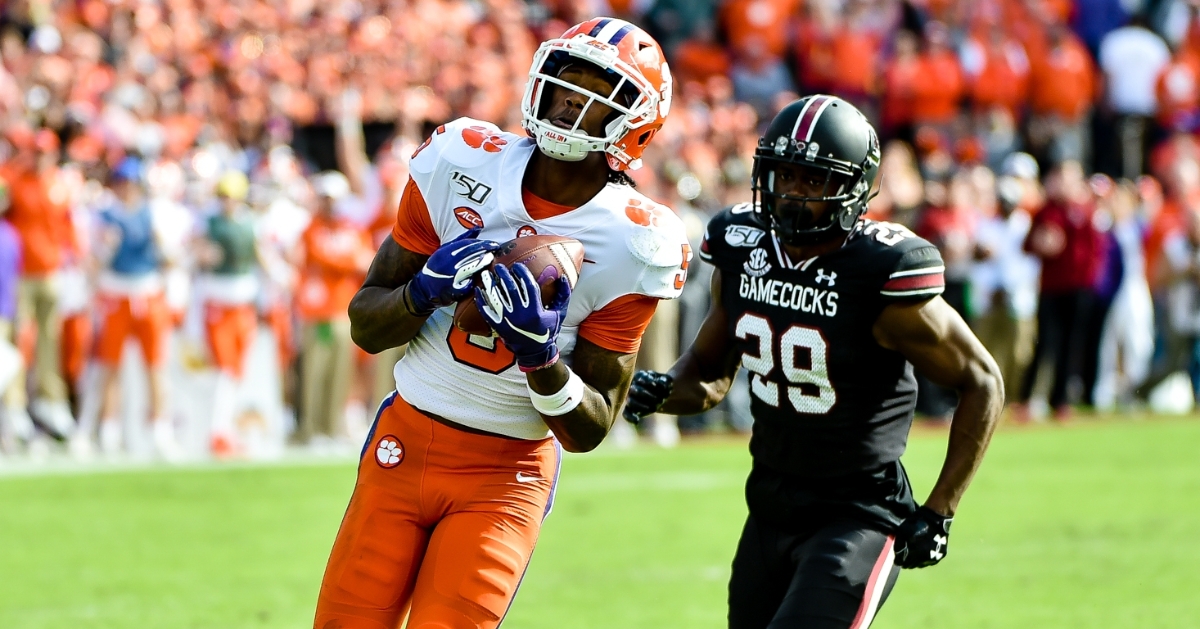 Tee Higgins had two touchdowns against the Gamecocks Saturday.

COLUMBIA, SC – Tee Higgins walked out of the Clemson locker room after Saturday’s 38-3 demolition of arch-rival South Carolina cradling the game ball given to him by head coach Dabo Swinney. As Higgins lined up for postgame interviews he set his bag on the floor but the ball remained cradled in his arms for the entirety of the interview.

That’s heady stuff for someone who plays at the place that calls itself Wide Receiver U.

“Coach Swinney gave it to me,” Higgins said of the game ball. “The first receiver to go for 10-plus touchdowns in back-to-back seasons. It's just a blessing. I wouldn't be able to do this without God and I thank God, my coaches, and the coaches for giving me the opportunity to do this.

“It's a blessing. It's something that every receiver would wish for, but to do it here at Wide Receiver U is a blessing.”

Higgins’ first touchdown came after the Tigers were stopped on their first drive, a goal-line stand by the South Carolina defense. Clemson quickly intercepted Gamecock quarterback Ryan Hilinski and Higgins and quarterback Trevor Lawrence made them pay. The Tigers faced a third-and-9 from the South Carolina 10 when Lawrence took a snap from the right hash and threw a rope to the left corner of the end zone, where Higgins stretched out and hauled in a pass over from the defender’s head that put Clemson up 7-0.

“That was momentum, going out there and getting that first touchdown,” Higgins said. “You saw how the game played out after that touchdown. We just kept going.”

“That was very impressive,” Scott said. “We were able to move Tee into the slot there and we knew we were going to get man coverage and a favorable matchup for us. That was just great execution.”

It was a play the Tigers worked on during the extended practice time the last two weeks and one that Scott told Higgins he needed to stretch for the pylon.

The second touchdown was a 65-yard pitch-and-catch that saw Higgins race past the safety for an easy score.

“We came in knowing that our receivers would have to make plays because they play a lot of man coverage and we took advantage of it,” Higgins said. “We didn't think they were going to run the coverage they did but I saw the safety coming at me and he was trying to catch up and I said I gotta go. It was just a great play and Trevor made a great throw.”

Higgins said that while he loves having his name in the Clemson record book, he knows that it might not be there long.

“It feels good, but we have some great guys coming,” Higgins said. “Justyn Ross is talented and he can easily break it. I am just going out there and having fun with it. I know we have guys coming that can break my records. But it feels great.”