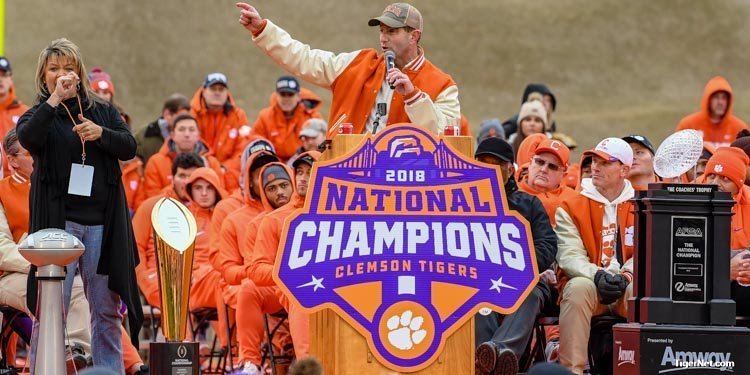 Swinney and family ride through Clemson

Clemson head coach Dabo Swinney was at his best Saturday morning inside a cold and drizzly Death Valley as the National Champions and their fans celebrated a second title in three years. Several players, President Jim Clements and Athletic Director Dan Radakovich all took to the podium, but it was Swinney that once again brought down the house.

His message, while always simple, has powerful meaning.

“This team, I tell them all the time that greatness is not your destiny. It’s a decision you have to make. This team made a decision to be great. It’s not your right to be great,” Swinney said. “You’re not entitled to be great. It’s a decision you have to make and they were special from day one. It doesn’t take long to get around this group to know - the leadership, the focus, the commitment and the will to win was special. We always say that champions are made when the stands are empty. Championships are won when nobody is watching and we always say you have to earn it...These guys were the epitome of that.

“Ain’t nobody going to give them anything. I didn’t give them anything - they earned it. My challenge to them this season was that we were going to have to accept the challenge each week with what we said - the eye of the Tiger and the heart of a champion. The way that I explained that to them was when I think of the eye of the Tiger I think of a focused intensity. Not just intensity - a focused intensity. And when I think of a heart of a champion, I’m talking about passion. I’m talking about focused passion on the challenge in front of us.” 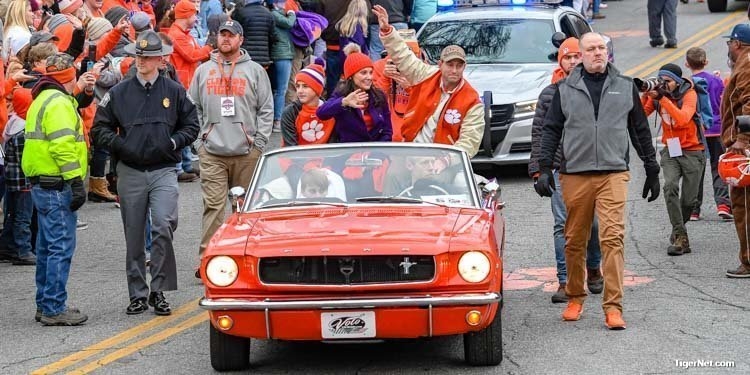 Swinney and family ride through Clemson "

“It’s hard to define that but you know it when you see it. You know it when you don’t. Every week I would go in and put in tape and go, ‘That ain’t it.’ ‘That is.’ And to get where we want to go, it’s going to take everyone in here accepting the challenge and you saw that Monday night out in Santa Clara, California,” Swinney said. “Especially in the fourth quarter when everybody is supposed to be at their best and we had the longest drive in the history of Clemson football to end the game. And it’s what you saw all year with this team.

“Here we are in little ole Clemson, this little town nestled in the hills and surrounded by the lakes. A little town of 10-15,000, here we are. I just want to tell you that when I look back over the last 10 years - it is amazing to see God’s hands at work. The way he has orchestrated players, people, decisions - it’s incredible. I’m so blessed to have been a part of it. These seniors wanted to be the best ever.”

Swinney knew this team had a chance to be special, to be the best ever.

“I read them a quote because I said, ‘Why not little ole Clemson?’ Somebody’s going to be 15-0 one day, it’s going to happen - so why not Clemson? Why not? So I challenged these guys with this quote: ‘So what you can vividly imagine and ardently believe and enthusiastically act upon, will inevitably come to be.’ That means you have to dream big,” Swinney said. “Then it means you have to enthusiastically take action...This team set out to be about it from day one and Monday you saw a team enthusiasticlly act upon their dream and believe. The 2018 team is the best ever. Drop the mic. The best ever. And they have set a standard for all future teams. It’s not that we won - it’s how we won."

Swinney – and the Tigers – made it clear that there are still goals to be accomplished.

“I told these guys all year long. Don’t have any doubt. Why would you have any doubt? Can’t you just look and see what we’ve been able to do. I told our team all year that everything we’ve done once we have done again except for the national championship,” Swinney said. “And now we’ve won our second national championship. For you guys coming back, I’ll change it up. Everything we’ve done once - we’ve done three or more times except for the national championship. So we’ve got work to do and I can’t wait to get started. I can’t wait to get back on the field in March. Our spring game is April 6 and I want to see this type of crowd April 6. Let’s fill this place up and I’ll leave you with this - thank you for all your support and I’m so happy for all you Tiger fans. I’m so happy that we get to share this joyful moment with you but understand, the best is yet to come.”