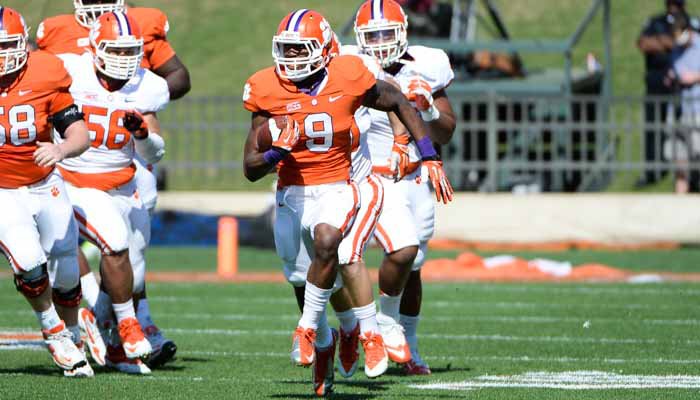 CLEMSON – One of the biggest question marks surrounding the Clemson offense heading into spring practice centered on the running backs, and the hope was that the 17 spring practices would at least provide some clarity heading into the summer and fall camp.

Have the question been answered? Perhaps not all the way, but Clemson head coach Dabo Swinney

Dabo Swinney
Head Coach
View Full Profile told the media Wednesday that he is excited about the possibilities.

C.J. Davidson
RS Jr. Running Back
#32 5-11, 185
Clemson, SC
View Full Profile , and that group was joined in the spring by newcomer Wayne Gallman

Wayne Gallman
RS Fr. Running Back
#9 6-1, 195
Loganville, GA
View Full Profile , who opened eyes during practice for the Orange Bowl and during the spring.

"Well, I think that that's a position that we have a chance to be greatly improved this season,” Swinney said. “Our offensive coaches are really excited about the pool of guys that we have there.”

Swinney said he likes what he sees out of the veterans.

“D.J .Howard is our senior leader that seems to kind of just gotten over that injury bug that has really hampered him, and he had his best spring,” Swinney said. “We're really excited about Zac Brooks. He was a guy that got hurt last year, was making great strides, hurt his shoulder. He's back and had an excellent spring. I think he is a very dynamic player. “

Howard had 57 carries (second among running backs) for 213 yards last season, a 3.7 yards per carry average. The rising senior has had a few big games in his career – at home against Auburn in 2011 when he had 86 yards stands out – and has 133 total carries for 581 yards during his first three seasons.

Brooks had 26 carries for 119 yards last season, an average of 4.6 yards per carry. Brooks suffered a shoulder injury at the end of the season, however, and didn’t play against Virginia in early November and got just one carry the rest of the season. The rising junior appeared to be the front-runner heading into the spring, but told the media following the spring game that he felt like he was no better than second or third on the depth chart.

Swinney said that Gallman and C.J. Davidson – a converted track athlete who saw his first significant time a year ago – did what they had to do in order to be noticed.

“Wayne Gallman is a guy that you're going to hear a lot about,” Swinney said. “He's not a complete player yet because he's still a freshman and we've got a lot of things to teach him and coach him up on, but he is the whole package. Going to be, I think, an excellent, excellent player for us this year and as he moves through his career. He has the size that we like.

“C.J. Davidson is the other young man, another young guy that really made great strides last year, got hurt right when he was turning the corner, came back and was a factor for us in the Orange Bowl. He is a very talented junior. “

Davidson had 34 carries for 155 yards last season, an average of 4.4 yards per carry. He had one carry for three yards in the Orange Bowl, but also caught three passes for 27 yards. Gallman was one of the stars of bowl practice. He has added weight and strength – he is over 200 pounds – and looks the part of a big-time running back and could be one of those guys that surprises everybody and winds up being the starter. As a senior at Grayson (GA), he had 516 rushing yards and eight touchdowns, but showed his physical nature on the defensive side of the ball – he had 46 tackles and seven sacks out of the linebacker spot. As a junior, he had 700 rushing yards and eight touchdowns.

Tyshon Dye
RS Fr. Running Back
#23 6-1, 205
Elberton, GA
View Full Profile redshirted last season, but showed enough during the early part of fall camp last season to gain the attention of the coaches. He had surgery on his ankle late last year, and then tore his Achilles during off-season workouts. He should be ready to go by August, and he and 4-star recruit Adam Choice

“Those four guys all bring something to we need to the table, and I think it's a very, very deep group,” Swinney said. “And then you're going to throw in Adam Choice, who's going to arrive here this summer who's an outstanding runner, and then Tyshon Dye, I keep reminding everybody don't forget about Tyshon Dye. He might be as talented as anybody we have. He's going to be coming off an Achilles injury, and we anticipate getting him back at some point during the season."