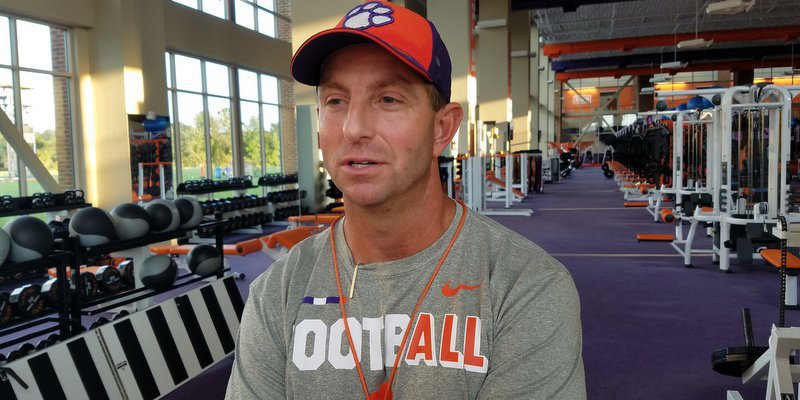 CLEMSON – Dabo Swinney was asked about the advantages of a night game in Death Valley, and he smiled like a kid on Christmas morning.

Swinney’s third-ranked Clemson team hosts 13th-ranked Auburn this Saturday in a primetime matchup that kicks off at 7 p.m., and Death Valley will once again be center stage under the lights and on national television.

TigerNet asked Swinney which night games stand out in his mind, and he came up with an impressive list.

“There's been a lot of good ones in 14 years. I've been in some good ones, some unbelievable night games along the way,” Swinney said. “Certainly, the Notre Dame game. We've got a hurricane coming up. That was one I'll never forget because there was a lot of emotion involved in that game, a long layoff, you're playing Notre Dame. That was pretty special. Georgia. They're all special to me. Anytime we get to play. We get seven chances to play in that stadium, and it's just such a privilege. It is special to be able to go and play in Death Valley. A night game is just a little whipped cream on top if you will. The place just comes alive. It's just fun. I know our fans enjoy it and we love playing under the lights when we get that opportunity.”

“It's always fun to get a phone call from Coach Spurrier because if he's calling he's got something to talk about and it's usually pretty funny. It was a neat call back in the summer. He's like, 'Yeah, I got this Hall of Fame thing.' He's having a little dinner the night before and wanted to invite some people, so I was really honored that he wanted Kath and me to come, so I look forward to that.”

“He made a little progress today, so he's getting better. It's one of those things that's a little sore, but very stable. It's not anything he has to have surgery on anything like that. It's just a little soreness he's working through, but he's getting a little better, and he'll get better each day. I'd say he's questionable.”

“They've gotten a lot of reps and a lot of practice. If that's the case, they'll be ready to play. They're good players. They'll be excited about the opportunity, but hopefully, Van will be able to go for us.”

“He looks good. I think he's going to be able to go. He's probable.”

“Practice wise, it was good. Guys were focused. It was a good work day for us. We had a little two-minute, competitive drill at the end of practice. They're locked in and getting ready. They're excited about the opportunity and know it's going to be a big challenge.”

On Logan Rudolph ascending to second-team

“These guys, we haven't played an opponent (even though they’ve played Kent St.), but they're practicing against good people every day. He's out there going against Mitch (Hyatt), (Tremayne) Anchrum, (Sean) Pollard and all of those cats. That's why he's second team right now because he's demonstrated that he can go play. He's processed it really well, and he played end. It's natural for him. He's got to be ready.”

“He's explosive. He's long and fast and explosive power through the tackle. I've seen that a bunch in fall camp. He's a guy that likes it and is going to be a great player. It's going to be fun to watch him grow and mature.”

"He'd know better than me. I've studied Auburn for years and years and have gone against some great Auburn team. Obviously, the one that won the national championship back in 2010, that was a great team. Coach Dye, he's coached some great ones so he would know. I'll let him be the judge on who's better and all of that, but I will say this - I agree with him that this is a great team. This is a very talented team. They've got all of the pieces - really good on defense, good in the trenches, they've got depth, they've got skill, they've got a quarterback, they've got a great kicker, good coaches. They've got everything they need to have a great team and great season this year. I guess what I'm saying is this is a really good opportunity for us early in the year - before you get into conference play - to see where you are."