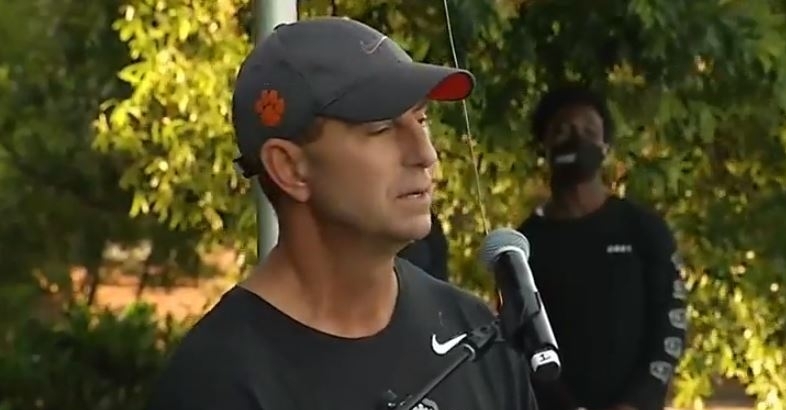 CLEMSON – Head coach Dabo Swinney stepped to the podium Saturday evening on Bowman Field and said that entire world has been put on pause in 2020 in order to have perfect vision in battling racial inequality.

As the marchers returned to Bowman for final remarks, Swinney stepped on stage to deliver a few remarks before introducing Rencher and Lawrence. His remarks were poignant.

“But as you saw today and moving forward, it has to be everyone's responsibility, not just some people's responsibility, it has to be everybody's responsibility to be more aware and to learn and to speak out against racial inequality,” he said. “United we stand, divided we fall. To move forward and to make this world and country better we have to find a way to do this, to unify and bring people together, and to do that we must bring people together, and to do that we need to speed love and forgiveness and grace. Lots of love and forgiveness and grace. We have to be able to disagree but not be disagreeable. We have to understand that people are not perfect and go through things differently, but I believe that the majority of the people in this country are reasonable people and will work together to unify. There is no hope for a better yesterday or a better last year or a better 200 years. But there is hope in the future, and that is because of my faith in Jesus Christ. And because of that, I believe the best is yet to come.”

Swinney went on to say that the country needs to have a spiritual awakening as well.

“It is also my hope that during this time we have a spiritual awakening in our country because I believe that is where true heart change takes place. But first, we must understand and we must learn and we must listen,” he said. “We can't change history, but we can learn from it, and there are certain things that we should no longer honor, glorify, or celebrate in this year of 2020.”

Swinney alluded to Friday’s announcement by the Board of Trustees that they would remove the name of John C. Calhoun from the Honors College and would also ask the state’s general assembly to change the name of Tillman Hall back to its original name.

It was at that moment that he delivered the most powerful line of the night while showing support for former wide receiver Nuk Hopkins and Deshaun Watson, who spoke out publicly about changing the Honors College name.

Swinney finished by saying his team is unified and he hopes it will help lead the way.

“I always tell our team that you have to create change from the inside out. And if we want the world to change the world around us we have to do what is right for Clemson,” Swinney said. “I greatly appreciate the leadership of the Board (of Trustees) and the President for the actions, not the talk, but the actions that they took yesterday. But I also hope that those who have the power to change building names will hear the cries of those they once cheered for and the cries of all these beautiful Clemson students, black and white because that is what I see out here today. I have often said there is nothing the world needs more than a football team.

“To be honest, I would like to go to Congress and dress them out in pads and helmets and put them through a little PAW drill, an inside drill, the Oklahoma drill. But I have loved seeing young men become best friends because of this game. They laugh, they bleed, and they battle together, but most of all they love together. There is no perfect place and there are no perfect people, but if I could bottle up what I've seen in this program the last decade, our world would be a better place. Our team loves each other, and they are unified, and they will continue to be a light in the darkness.”