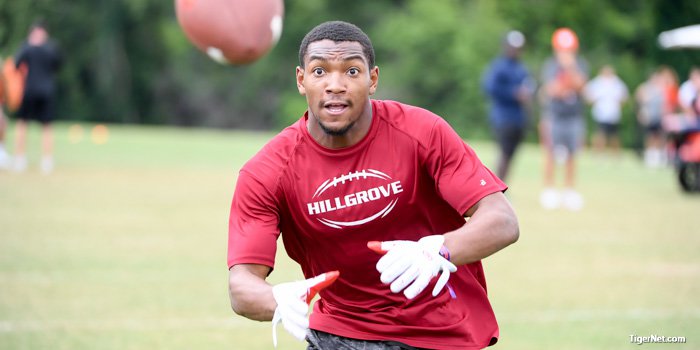 With cloudy skies and temps in the high 60’s and more talent on hand, there was a different feel to everything and it showed during the drills portion of the session. There were plenty of prospects on hand, and we’ll dive right into everything we saw and heard.

*It’s always fun to listen to tight ends coach Danny Pearman, who typically calls prospects by their school instead of their last name. “Come on Aynor, you can do better than that. Don’t stress yourself Irmo, it’s just a football.”

During the early part of the session, however, Pearman was poking a little fun at tight end D.J. Greenlee’s quarterback skills, mentioning that Greenlee is “no Deshaun Watson.”

*Offensive line coach Robbie Caldwell was in rare form early. He walked by one prospect during stretching exercises, saw the lack of effort, and asked, “Have you done quit? We are just getting started!”

He has all the tools, and to me, he looked bigger than his listed height/weight. Will a Clemson offer come out of this? Stay tuned. 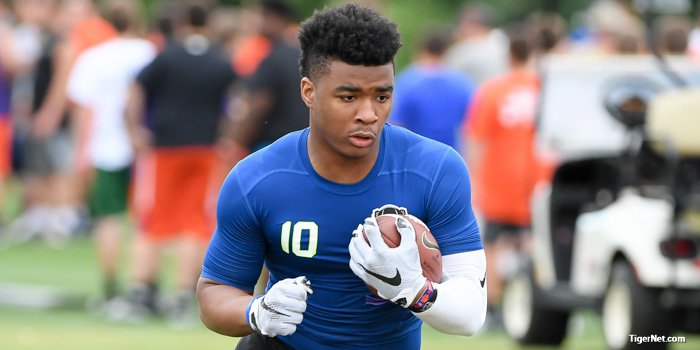 *Another addition to the morning session was Detroit (MI) Cass Tech 2019 running back Jaren Mangham. Mangham worked out with Tony Elliott’s A group, and quickly caught everyone’s attention. Mangham visited Clemson this spring and holds offers from Michigan State, Pittsburgh, Purdue, Cincinnati, Kentucky, and others. We’ve known for a while that Clemson is being stingy with its 2018 running back offers, and might not make another offer this cycle. That makes 2019 even more important.

*Another running back who impressed is Irmo (SC) 2019 prospect Kendrell Flowers. I watched Flowers at Ramon Robinson’s EPT Showcase in Columbia a few weeks ago (Ramon keeps finding the best talent in the state). Flowers is the nephew of former Clemson running back Raymond Priester and won MVP honors at the Showcase. He has terrific receiving skills and speed to burn (he’s faster than Raymond).

Flowers is also getting interest from South Carolina.

*The Irmo coaches brought in another nice-looking prospect today – 2018 defensive end Trajan Jeffcoat. Word is he would jump on a South Carolina offer (Missouri is his biggest offer), but I see a lot of upside with the 220-pounder.

*Working out with the defensive line group was 2019 Clayton (NC) 2019 defensive lineman Savion Jackson. Jackson (6-2, 240), has offers from South Carolina, Virginia Tech, North Carolina, N.C. State, Penn State, Florida, and Pittsburgh. He was impressive during drills – quick feet, good motor (even though he did draw the ire of “Coach” Christian Wilkins at one point for not following directions). 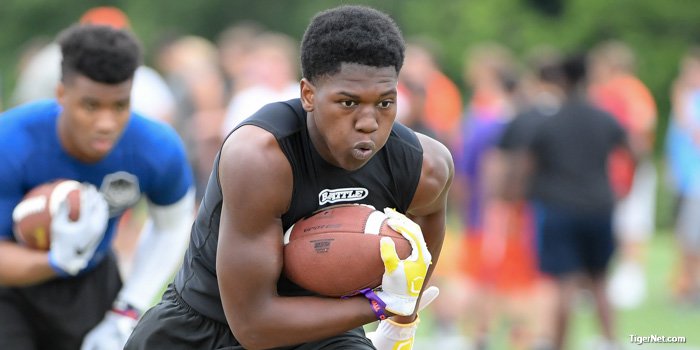 This is a kid that would likely have had an offer from Clemson at this point three or four years ago. He’s another one we want to watch in the afternoon session.

Alexander is lean and intense. He takes coaching very well, and I like his burst and quickness. Auburn, Louisville, and Oklahoma are his biggest offers, while schools like Georgia and Clemson are still waiting.