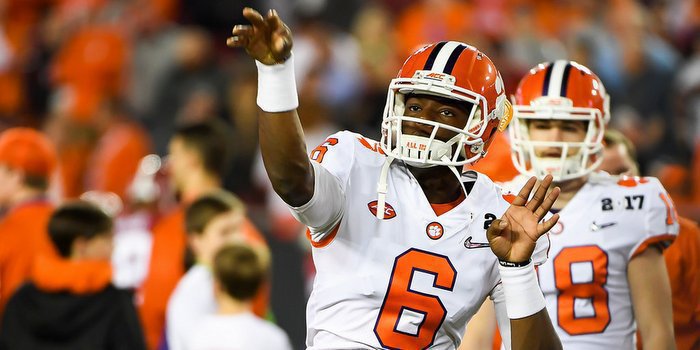 Zerrick Cooper will get the chance to prove himself this spring

Spring practice starts a week from tomorrow, and head coach Dabo Swinney will likely meet with the media before the start of practice to answer questions and give his thoughts on the beginning of the 2017 football season.

The press conference will be held in the new football operations complex, and that alone will show how much things have changed in a year. Last spring, the new complex was about four months into its construction, Deshaun Watson was being lauded as a Heisman Trophy candidate and the Tigers were looked at as one of the teams that could win the national championship.

This spring is different – Watson has moved on, the new complex is complete and ready for business and this year’s team will face myriad questions throughout the spring, summer and fall camp. But with a lot of those questions comes excitement – a bevy of young players will be looking to earn serious playing time by impressing the coaches this spring, players we can’t wait to see.

Here are a few of those players, and we’ll start with the offense:

We’ve seen Cooper in limited action during bowl practice, but that was just a few throws here and there. Now he gets the chances to run with the first string offense, and it will be interesting to see how he fares. He’ll be in a four-way battle for playing time with Kelly Bryant, Tucker Israel and some new guy named….

Zerrick Cooper will get the chance to prove himself this spring "

Johnson has been on campus for a few months, so he’s had a chance to learn the playbook and watch a lot of film. He’s been impressive every time we’ve seen him, but when you’re sharing reps with other players you have to make the most of every throw. It’ll be interesting to see how he competes.

A lot of people expected Feaster to compete for a starting job last fall, and if you listened to some media members that cover the team (names redacted to protect the innocent), they believed that Feaster would unseat incumbent Wayne Gallman. Instead, we only saw flashes of his potential. He played in 12 games, but only got carries in six of those games. He still carried the ball 37 times for 221 yards, leading the team with a 5.7 yards per carry average.

Gone are Artavis Scott and Mike Williams and all of their productivity. Powell, Chase and Overton have a chance to impress the coaches and solidify (for now) a spot on the depth chart before a couple of cats named Tee Higgins and Amari Rodgers arrive this summer. Powell has exceptional return skills, and with Scott’s departure there is an opening on special teams for him to make his mark.

Jordan Leggett was an integral part of the offense, and his production will likely have to be replaced by several players. One of those is Richard, who played in all 15 games last season but caught just one pass for nine yards. Whoever plays quarterback is going to need that safety valve at tight end, and Richard has the size and the skills to be that guy. Can he push through and earn a starting spot?

Clemson’s depth on the defensive line allowed Cervenka to move to the offensive line last year, and from everything we’ve heard he’s been impressive at center. The Tigers are having to replace veteran Jay Guillermo, and Justin Falcinelli will get the first look to be the starter. However, I’ve talked to a lot of people around the program that think Cervenka has what it takes to be a mainstay at the top of the depth chart. He played in six games and earned 61 snaps last season, so we’ve seen a few glimpses of his potential. This spring we will see more of what he has to offer.

Sean Pollard earned most of the snaps at right tackle after Jake Fruhmorgen left, and he did an admirable job filling in as a true freshman. But another freshman also earned snaps, and he has the versatility to play a few spots on the line. The coaches I’ve talked to rave about Anchrum’s potential, and he could take a major step forward this spring.