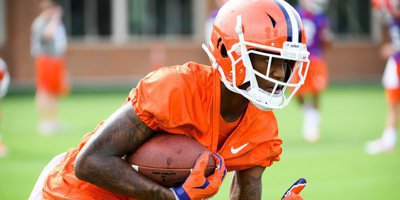 Fall camp comes to a close, and now the Tigers will begin preparations for Kent St. and Auburn.

The Clemson football team scrimmaged for almost three hours Saturday in Death Valley Saturday, signed autographs for the fans Sunday and will practice Monday and Tuesday. The team will take Wednesday off – it’s the first day of classes – and season preparations will start this week.

We will likely have news about the depth chart at some point this week – not that there are a lot of question marks – but the next week is the week before the storm. That includes today when thousands of people will descend on campus for the eclipse.

Before the moon blots out the sun, however, we’ll take a quick look at what we’re hearing heading into the final stretch of camp.

The freshman out of Louisiana has had the best camp out of all the backs, and the coaches haven’t spared the praise when talking about his progress during camp. Co-offensive coordinator Tony Elliott said that Etienne was working with the first-team last week, but was still fourth on the depth chart. How much will Etienne play? We will see where he falls on the depth chart heading into the opening week, and we will see where he is after the first week.

On our end, I’ve heard nothing but great things about Etienne from those within the program. An ex-player said he’s heard that the coaches think Etienne is going to be a star. I’ve heard from more than one ex-player that those who have watched practice have echoed what the coaches have said – Etienne has had the most explosive plays.

However, I’ve also heard a lot of great things about Tavien Feaster this camp, and one message that I got late Saturday underlines the fact that Feaster is going to be a big part of this offense this season. I was told that the coaches have given Feaster extra reps, even when he’s tired. I was told they are “preparing him for the grind” and for that 20th or 25th carry at the end of a game.

This battle is going to be fun to continue to watch, and we didn’t even include the fact that C.J. Fuller and Adam Choice have had solid camps. Four running backs? That’s a good thing.

It was good to hear head coach Dabo Swinney talk about defensive tackle Jabril Robinson Saturday. In case you missed it, Swinney said that Robinson has had an excellent camp and is option 1A behind Christian Wilkins and Dexter Lawrence and will likely see starter-snaps at tackle this season.

It always amazes me to see guys come into the program, get left behind a little and then mature into a trusted player in year three or four. Tight end D.J. Greenlee is one that comes to mind on the offense, and Robinson is the one on the defense.

I’ve noticed he’s been more of a vocal leader, and in a lot of the videos the school has posted he’s been front and center. Last year, he was one of those guys mentioned by the coaches that could have taken snaps at defensive end, but somewhere it never worked out (he has 132 snaps in 12 games over two seasons). We spoke with Robinson the other night, and he admitted that he’s matured, takes the game more serious than he did in the past and realizes now is the time for him to make his mark. We will run that story a little later this week.

Speaking of competition – wide receiver Deon Cain is penciled in as the starter at the “9-man” receiver spot made famous by the likes of DeAndre Hopkins, Sammy Watkins, Charone Peake and Mike Williams. However, Diondre Overton has been getting snaps at that spot and has drawn the praise of both Swinney and Scott over the last two weeks.

Fast forward to Saturday, and both Overton and freshman Tee Higgins took turns at the spot while Cain rested. Both receivers had good days from all accounts, and it’s going to be fascinating to see how Scott splits the snaps once the season starts.

Cain deserves to start, and he told us a few weeks ago he wants to play 60 snaps or so a game. But Overton and Higgins also deserve to play, and might see snaps at other positions as the coaches endeavor to get all of their playmakers on the field.

Yes, this offense is young in spots and inexperienced in spots. But there is no denying that there are playmakers everywhere. Get a couple of games under its belt, and this offense is once again going to be among the nation’s best.