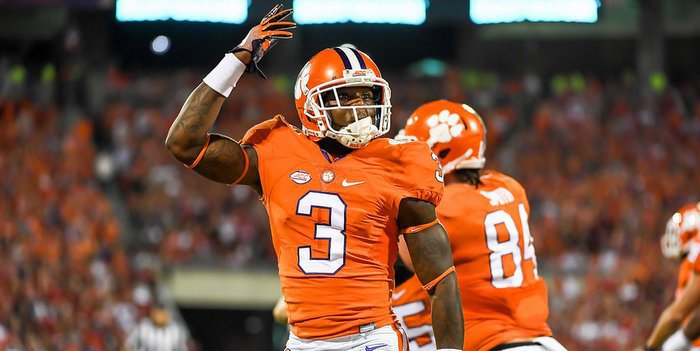 The game of the year so far in college football certainly helped Clemson’s offensive numbers after it won a shootout with Louisville on Saturday night.

But the 42-36 Tigers win damaged the team’s defensive stats somewhat.

Wayne Gallman had his best game of the year with 110 yards on 16 carries, and he moved into the top 100 in rushing yards at No. 80. Gallman is now averaging 73.2 yards per game.

The Clemson defense dominated the first half against Louisville, but Lamar Jackson and the Cardinals came alive in the second half. And that hurt the Tigers’ national stats. Clemson dropped from fifth to 13th in scoring defense (16.0 points), 15th to 39th in rushing defense (128.8 yards), third to 14th in passing defense (159.6 yards) and third to 12th in total defense (288.4 yards).

On defense, Jadar Johnson had another interception to raise his season total to three, which is tied for fifth. He also ranks 13th with seven passes defensed.