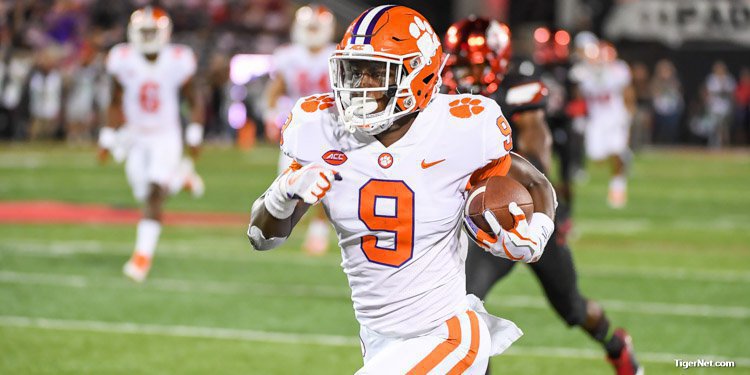 The 81 yard touchdown run by Travis Etienne is the longest by any Tiger since C.J. Spiller had an 83 yard run against Auburn in the 2007 Chick-fil-A Bowl.

In case you missed it, Clemson football is here to stay on the national stage, as the Tigers' depth in talent and skill showcased under the lights in Louisville, Kentucky.

After taking a second look at the game, here’s how Clemson graded out versus the Cards:

Through three games, Clemson’s offense is, one, much better than it was at this point last season – and two, that's a trend that may very well continue as year goes on.

Kelly Bryant came into the season highly-underrated locally and nationally from a hype standpoint, but he’s proven to bring something different to the Clemson offense. Why? “He’s a problem,” as Clemson coach Dabo Swinney said in postgame of the 47-21 win at Louisville.

Bryant’s elusiveness and toughness as a runner has factored in with a strong arm and some solid decision-making on reading progressions and throws. Then you add in what motioning talents like Ray-Ray McCloud across the play does to defenders, and what proved to be a stacked running back corps Saturday night battering the defense up the middle and outside, and a defense's issues are compounded.

Bryant is far from perfect. He missed some throws and is still learning when it comes to avoiding negative-yardage plays, but for a guy who had two starts previously, he was everything Clemson needed and more in a hostile environment. His arrow is only pointing up.

Similar to last week, the O-line could play be better, especially at right tackle. Overall, however, the group had plenty of push and cleared the way for an improved ground game and did enough in pass protection.

The four-man RB corps had its moments, and the floodgates of talent opened late with this 81-yard run:

ESPN’s Kirk Herbstreit called Clemson’s offense “an embarrassment of riches” after Etienne's dash down the sidelines – recalling a Jeff Scott story about Etienne breaking through for six runs of 80-plus yards in scrimmages against Clemson’s first-team group in camp. After getting shutout on snaps versus Auburn, Etienne is sure to be a staple of the offense going forward.

In the receiver group, McCloud and Hunter Renfrow continue to stand out as reliable targets. They are 1-2 in catches on the season now (McCloud, 16 for 220 yards; Renfrow 15 for 149). Bryant’s ability to find them in clutch situations is a big factor in Clemson ranking 11th nationally in third down offense (53.5 percent).

Numbers to know: 3 – Bryant completions of 30-plus yards (33, 40, 79 yards), matching his season total up to Saturday. 6.3 – Chunk plays (15-plus yard pass or 10-plus-yard run) per game on Bryant throws or runs this season. 76.1 – Ray Ray McCloud’s catch percentage in 21 targets this season, who totaled a career-high 115 receiving yards by halftime at Louisville. 0 – Turnovers, for the first time in a nine-game stretch where the Tigers lost the turnover battle five times (and still went 8-1).

The nation’s most electric quarterback rarely looked comfortable – Clemson forcing Lamar Jackson into some mistakes and also that clock in Jackson's head running a little fast knowing what could await him.

Clemson’s varying pressures and coverages kept Jackson from getting into any kind of rhythm while it was a closer game, and he even struggled some late versus a Brent Venables’ group deep into the bench by the fourth quarter.

Even the one meaningful Cardinals score came right after some confusion after starting safety Tanner Muse targeting ejection. It was a heck of a scramble and throw by Jackson, but you wonder if they score a touchdown there if Swinney gets the timeout in before the play.

Louisville coach Bobby Petrino threw in some wrinkles after some early struggles in the passing game, but Clemson adjusted and largely contained Jackson on the ground when it counted. A long Jackson run in the third quarter nullified by a chop-block flag set up the true game-clincher, O’Daniel outfoxing Jackson by moving up initially to cover the running back and dropping back for the easy pick.

It was emblematic of a night where Clemson had an answer for just about everything, and like the Auburn game - but more impressive given Jackson’s ability, Venables’ group performed at all three levels, even managing Muse’s absence for most of the game.

The fourth quarter was no masterpiece, including a couple subs losing Louisville’s Jaylen Smith for a 36-yard touchdown, but as a whole, keeping Jackson from his rhythm tipped the scales of the game heavily in Clemson’s favor to pull away.

Numbers to know: 1 – Louisville score/touchdown in its first 10 drives, after averaging 41 points in the first two games and scoring on its first four possessions versus UNC the week before (and 8-of-12 drives overall). 2 – Louisville plays on Clemson’s side of the 50 in the first three quarters as the Tigers went up 33-7. 9 – Tigers with at least a share of a tackle for loss versus Louisville, including two listed third-string on the depth chart (S Nolan Turner – 1; LB James Skalski – 0.5).

If you didn’t know by now, Clemson has its punter and the redshirt freshman Will Spiers, kickoff specialist Greg Huegel and the Tiger coverage teams kept Louisville pinned deep in its territory all night.

Huegel recovered from missing his first field goal attempt (42 yards) with a short (31 yards) and a career-long make (49 yards) to keep the pressure on Louisville in the first half.

Overall, Clemson’s ability to rely on the special teams is what makes this team even more of a factor in big games.