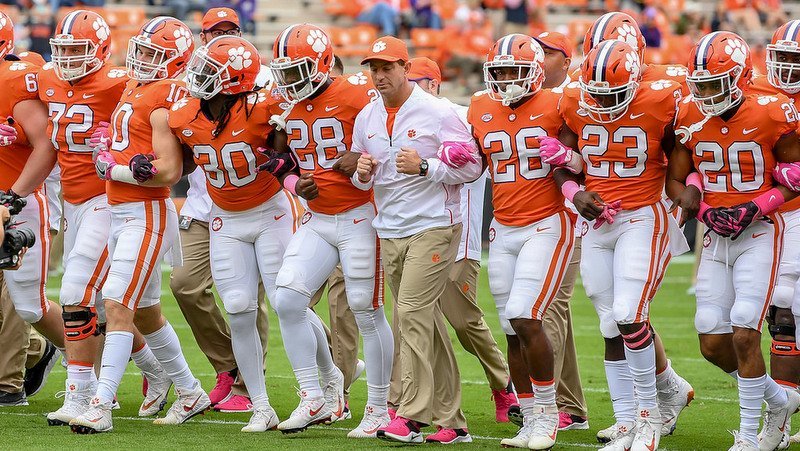 Clemson is ranked second in the country by most major polls and is on a roll, having outscored the last two ACC opponents by a combined score of 104-10. Head coach Dabo Swinney told the media Sunday evening that he is pleased with his team’s improvement, but the best is yet to come.

"A really fun tape to grade and a fun game to watch live and on tape. I was really pleased with our guys. We played a complete football game,” Swinney said on his Sunday teleconference. “But still, there is a ton of room for improvement. Our best ball is in front of us. That was a good team that our guys were excited to play. We prepared very well.

"Defensively we tackled well and our effort was tremendous. We dominated up front. They couldn't run the ball. They were seventh in the nation in passing. We had 10 tackles for loss, a sack and they were 2-of-12 on third down. They were leading the nation on third down coming in. We had a bunch of pass-breakups. We wanted to know how we would match up on some of those competitive plays and we did a nice job with it.”

The Tigers put up over 450 total yards of offense against the Pack.

“Offensively, we are growing in confidence. We rushed for 471 yards against Wake,” Swinney said. “Then we come back and throw for 380 in the next game. So that's very encouraging to me. Our protection was very good. We had one sack on our back. We had another which was more on the quarterback. Our O-line did a better job with the twists. Our production on third down was 8-of-15. We got points off of turnovers and had no offensive turnovers. We involved a lot of people, too. We missed some throws early. It's probably the most drops we've had all year. We had six in the game. There is still more out there for us, though. Overall it was a complete game and I'm proud of how we competed.

"Special teams, I'm proud of our kickoff return. That set the tone for us. They got zero return yards on us. I thought Amari Rodgers did a nice job of fielding the ball. It was good for Greg Huegel to hit a couple of field goals. A lot of good things in the game and great energy throughout the game. Those guys just complemented each other in every phase. Health-wise, we came through in good shape. I like where our team is right now.”

Next up? A noon date at Florida St.

"Florida State is a team that's getting better. They have plenty of talent,” Swinney said. “We all know that. Players are off today but us coaches are in today working on Florida State."

On floor collapse in Clemson

“What a horrible thing to see. I did not know about it until late, late last night. We did have one player (there), a walk-on named Sylvester Mayers. He's okay. Thankful for that. Our thoughts and prayers to those who were a part of that. Don't really have other details."

"All three phases. So much still there to coach. We're doing a lot of good things. Still a lot of room to improve and I think our team is hungry to improve. They got outside of us a few times. Our technique with our alignments and fits, some coverage things, leverage, pre-snap communication, a lot of things.

"Offensively, I'd like to see more consistency from a few players throughout the course of the game and have no lulls. We've had some careless penalties, too. Our running backs have to be better without the ball. Just some details that we need to improve on up front. Everybody likes to slant their fronts against us. Every position there is a list of things we need to work on. The good news is we're winning and we're not even close to being at our best at this point. But, we are getting better and we are eager to improve."

On the freshmen getting to play

Improved play in the secondary

“The biggest area right now is at safety. Nolan Turner - he was one of the best players on that field yesterday. He played lights out and impacted the game on special teams. He impacted the game at safety. He had some critical tackles. He's just very knowledgeable in what he's doing. Very proud of him. I think he graded like 93-percent in 28 snaps. He's just a productive player. He played last year some as a red-shirt freshman. We knew that it was a matter of time before he just put it all together. He and Denzel Johnson have stepped up for this team. We needed them to come through for us. They've made the most improvement in terms of where they were last year. I'm also pleased with Mario Goodrich and Kyler McMichael. We're in a good spot with those guys. Mark Fields, Trayvon Mullen, and A.J. Terrell did good things, too. A.J. Terrell is a special talent and he loves to prepare. He and Trayvon are cut from the same mold there. A really good group all across."

“He's been good. I'm proud of K'Von. He has worked hard. He has become a great player for us. The interceptions are a product of getting in our base defense. I'm proud of all of our guys. I see us improving. We're not turning guys loose. Guys may make some competitive plays, but we're positioned where we need to be. His knowledge back there, his communication back there have been good. That's 15 of 16 games in a row where we have created a turnover. I'm excited about the progress we are making."