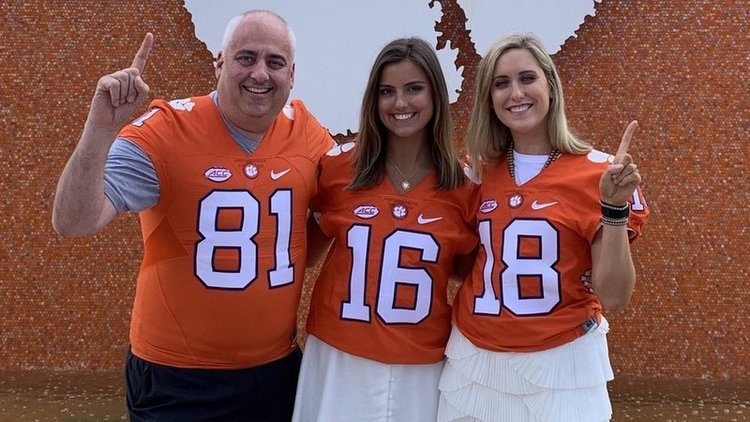 Mark Packer (left) takes a photo with his two daughters

One family, three National Championships, and one hilarious photo op.

Mark Packer is a familiar name to college football fans across the Southeast. He’s hosted the Southern Fried Football Show, hosted a popular talk show in Charlotte for many years and is currently the host "Off Campus” on ESPNU Radio on SiriusXM 84 & “ACC Central” on SiriusXM 371.

He’s also a Clemson graduate who has two daughters that have attended Clemson – GG graduated from Clemson last week, and Emerson is a rising junior. Packer was a freshman when the Tigers won the National Championship in 1981; GG was already in school when Clemson won in 2016, and both daughters were in school when the Tigers claimed the crown again last season.

“I thought about doing that probably right after they won the National Championship. I thought it was pretty cool that my two daughters - GG just graduated last week and Emerson is going to be a rising junior - and I thought it was kind of cool that they've gotten a chance to experience what I experienced as a freshman in 1981,” Packer told TigerNet. “I thought of the idea of getting those jerseys and when we did our camp tour in April, which was the night of Dabo's All In Event, Dan (Radakovich) came in for an interview, and I said hey, I gotta ask a favor of you.”

Packer offered to buy three jerseys for the photo, but Radakovich said there was no need to buy jerseys for a one-time photo shoot. Radakovich also loved the idea and jotted a note to himself to make it happen. Packer forgot about the request until he received a phone call from the Tigers’ Athletic Director.

“We came down for the graduation last week, and Dan Radakovich called me on the way down and said, hey, I have the jerseys waiting for you,” Packer said. “He thought it was a cool idea. That was how it all got started. So we met him over the Reeves Complex after graduation, and he had the jerseys and asked where we wanted to take the photo. I didn’t have a clue, so he suggested we take it right in front of the paw.”

As Radakovich was handed out the jerseys, he was laughing as he warned Packer about the size of Drew Swinney’s No. 81 jersey.

“He was laughing. He said, Pack I gotta tell ya, of the three jerseys, 81 is by far the smallest. I was thinking it wasn't a big deal. I hadn't even looked at them yet,” Packer said. “He goes, no, it's Drew Swinney's number, and it's the smallest jersey of all of them. And we are outside, and it's me and him and my wife and daughters. And he hands me the jersey, and you know those things are made to be skintight even on incredibly athletic people. And I am looking at it, and I am thinking, I don't know if I am going to be able to get this over my head much less over my body. And my wife is laughing, and Radakovich is laughing, and I'm over there trying to get this thing over my head without snapping both shoulder blades.”

What ensued was hard work, chaos, and a lot of laughter as everyone endeavored to get the jersey over Packer’s head.

“I got it to about halfway down my chest, and I was laughing so hard. If we had it on video, it would be a $10,000 winner on America's Funniest Home Videos,” Packer said. “I told Radakovich it reminded me of a boa constrictor that just ate a goat. It had no chance of working. My wife grabbed one end, Radakovich grabbed one end, my girls were grabbing and pulling, and they are yanking this thing just trying to get it over my gut. And they finally get it over so that we can see the 8 and the 1. You couldn't even distinguish what the numbers were for about half an hour. So I've got this jersey on, and I look like the Michelin Man. And of course, my girls look like a million bucks. And Radakovich is laughing his butt off, and he actually took the picture.”

Packer said it reminded him of a boa constrictor eating a goat, but Radakovich had a slightly different but still funny description.

“It was fantastic. It took all of four minutes to put the jersey on,” Radakovich said. “He looked fantastic once we got it on. At some point in time, you will be able to see in the background this picture of two lovely women and a sausage. It was snug. Snug is a nice word.”

Dabo Swinney heard about it and gave Packer plenty of grief.

“Dabo had heard about it, and he saw me today, and he was all over my case. He said, 'I can't believe you ruined my son's jersey' and all this stuff,” Packer said. “I said you should have seen us trying to get that thing off. You had three grown adults trying to rip that jersey off of me. I wish we had videotaped it. But the end of the story is we've all experienced the joy of Clemson winning a National Championship.”

The Packers showcasing the 3 National Championships won during our Clemson years. Apologies to stretching Drew Swinney’s jersey beyond repair. pic.twitter.com/XIXWGiWGr4