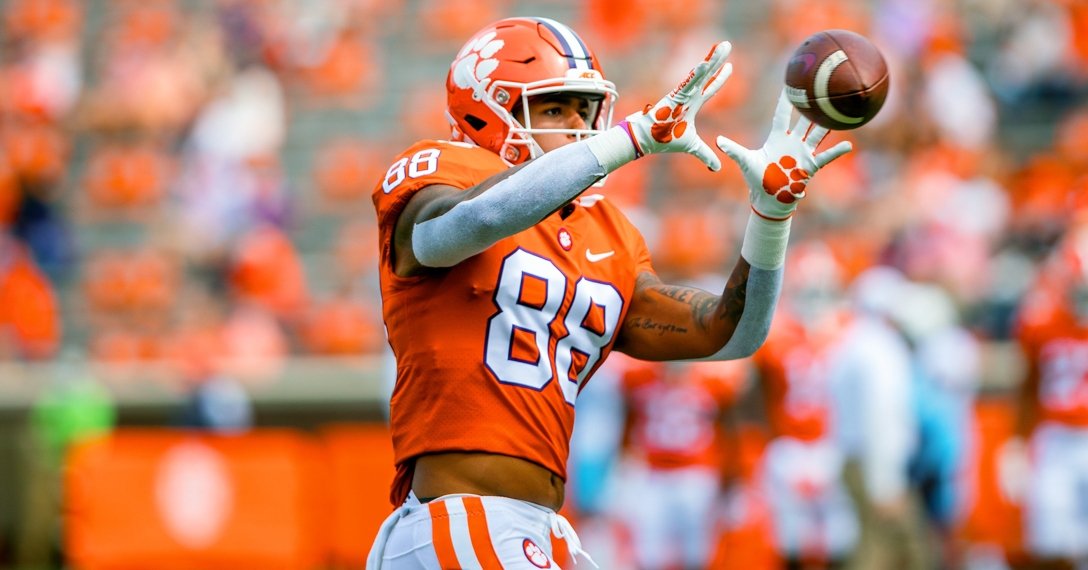 Braden Galloway warms up for Saturday's game against The Citadel (Photo per ACC).

CLEMSON – Clemson defeated The Citadel 49-0 Saturday to improve to 2-0 on the season and have an open date this weekend.

The Tigers will host Virginia in a rematch of last year’s ACC Championship Game at 8 pm on October 3rd (ACC Network).

A few players met with the media Monday to discuss the open date, the win over the Bulldogs and look ahead to Virginia.

*Felt good to make his first start at Wake Forest. Said he is expecting donuts after the defense pitched a shutout Saturday.

*Being a freshman last year, there was a lot going on. Knowing you had the opportunity to play was huge. Heading into the spring wanted to get stronger mentally and physically and spiritually. Wanted to be the best he can be.

*Tried to put on weight too fast and feels like he lost speed. Now he is the same weight and leaner. Got his hips back to better mobility. Also had to get his confidence back the way it was in high school. They wanted him to put on weight but he wasn’t as mobile as he was.

*Moment of unity at start of second quarter meant a lot to him. They wanted to make sure they did something as a team early in the game to show the world they are one team unified together.

*Looking forward to playing a team from back home when Virginia comes calling in two weeks.

*He loves the enthusiasm of the freshmen like Bryan Bresee and Myles Murphy and Demonte Capehart and Tre Williams. He said he laughed at them when conditioning work started.

*The team has to realize that yes, they have an open date, but this is not a vacation week. They have to keep working.

*He said it definitely feels like football now. Still different, but this is definitely football. Whether there are no fans or 20,000 fans. He said this is what they are getting and are happy to just be playing.

*Said he is disappointed when there is pushback from fans about the social justice message but can’t let that affect how you feel and what you believe in.

*He was very excited about the first shutout.

*DL was missing Tyler Davis and Justin Foster and Xavier Thomas but still dominated. However, he feels like they still need to develop depth.

*Says Brent Venables is a smart coach, very educated, and puts the players in the best position to go win. He said he never questions what Venables tells him to do.

*Had to develop a different mindset in earning the starting job. Lot of guys in the room that work very hard and they push each other every day. Felt like his hard work didn’t go unnoticed and now he is being recognized.

*Was more nervous for the Wake game than he was for the CFP when he returned. Now he is wanting to go out there and show he can be a consistent player.

*When it comes to the tight ends, it’s about “igniting the fire” and taking advantage of your opportunities. They want to go out there and be the best group they can be. They want to be in great position when their number is called.

*On Davis Allen, he said Allen has more knowledge of the offense and has put on muscle. Very physical at the point of attack. He will continue to grow and be a good player.

*Galloway wishes there could be a few more games before the break, but guys are banged up and it will work out for the best. They need to get guys healthy for the next big stretch coming up.

*On Trevor Lawrence, he said that when they go back and watch film you wonder how he made that throw. He said Lawrence made a throw against Wake (to him, to the corner of the field) and made it look easy. Makes amazing throws, whether it’s in the game or at practice.

*Said that DJ Uiagalelei has been able to come in and learn from Trevor and it will help him in the long run. He is very strong and has incredible arm strength. He throws the ball very hard and very strong. He is starting to be in control of the offense and understands protection schemes and will be a great player.

*Great to pitch the shutout and see consistency from every group that went out. Said it was pretty special.

*These first two games, both offenses have been triple-option like and have stressed the defense. He has been impressed to see this group make plays and play well. They are young guys but don’t back away from the challenge.

*The young safeties like to hit, and Ray Thornton’s hit on The Citadel ball carrier was quickly shared in the group chat. He said they all bring some kind of physical play.

*The freshmen – Tyler Venables and RJ Mickens and Malcolm Greene – are mature and smart and picked things up right away. They take their preparation seriously.

*He says that Tyler Venables will be a special player and you can tell he grew up with Coach V.

*Says moving from DL to OL was made easier because if you are a good DL, then you understand what the OL is trying to do. There is a good skillset for both, but the hands are they key.

*He said he isn’t sure why wrestlers make good offensive linemen.

*Has had to keep his conditioning up to keep a good weight, battles being too heavy.

*Went home during COVID-19 and stayed with his legal guardians. More on his life growing up in this story.

*Not a culture shock coming to the South because he was exposed to different cultures growing up.