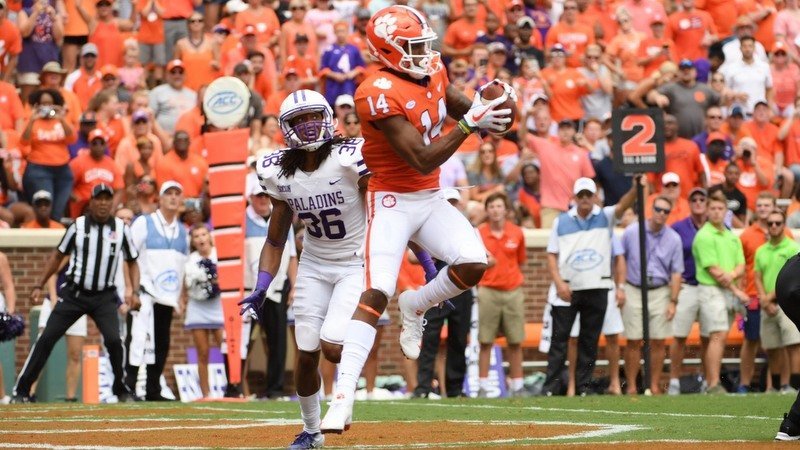 CLEMSON – Imagine that you’re an opposing defensive coordinator and you turn on the film to start preparing for Clemson, and you see Diondre Overton, Justyn Ross, and Tee Higgins lined up at wide receiver at the same time. If you’re keeping track at home, that’s 19 feet of receiver that have to be covered.

Overton is stepping in while Amari Rodgers recovers from a torn ACL, and wide receivers coach Jeff Scott said Friday that was pleased with Overton’s play.

"I thought Diondre was one of the most consistent guys today," Scott said. "His body is in great shape. I think he can really do a good job while Amari is working his way back. I think for him it was buying-in in the weight room and getting stronger and the maturity to understand that what he does in the weight room will affect what he can do on the field. I think his body is in the best shape it's been."

Ross, Higgins, and Overton on the field at the same time, with Trevor Lawrence slinging the football?

“You think about a lineup of Tee, Diondre, and Ross out there, and those are big guys and then you got a guy like Trevor Lawrence who can throw the ball to them with a big catch radius," Scott said. "I think that's one thing we're excited about with Overton is on those corner balls and maybe some of those vertical balls down the middle, dig cuts and all that it gives you a big body."

Scott that both Ross and Higgins have room to improve, another scary thought for opposing defenses.

"It gets down to details in route-running, break points, when they get their eyes around, the timing, understanding different release moves,” Scott said. “But number one it takes a hunger for them to improve, always working and striving to get better, which they do. And number two it's coming out here and putting it to work. And they did some good things today, but obviously very high standards for them. Any time we don't compete for the ball, I'm trying to figure out exactly what happened."

Rodgers will return to the lineup sooner rather than later, and veterans TJ Chase and Will Swinney welcome talented freshmen Joe Ngata, Frank Ladson, and Brannon Spector into the fold.

That’s a wealth of talent that has Scott singing a familiar refrain.

"We do our state of the union before each camp. Each position coach gives his breakdown. Then we go to the segment meeting,” Scott said. “I'm kind of going back and editing what I wrote in the past and it seems like every year I'm telling these guys that we have the potential to be the best group that we've ever had, and I truly believe that. The key word is 'potential.' Last year I felt like we took a really good step forward."