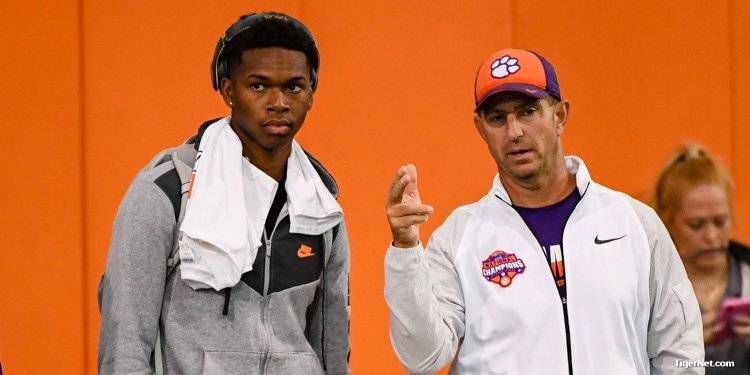 The wait for E.J. Williams is almost over.

The 4-star 2020 receiver out of Phenix City (AL) Central is scheduled to hold a 2 pm ET ceremony at his school Saturday where he will announce his decision. His finalists are Clemson, Alabama, Auburn, and LSU.

The date is special for Williams – his mother Vontrelle celebrated her birthday earlier this week, but the 24th is also the anniversary of the death of his father, who served in the US Army. That means Williams will have both of his parents on his mind when he announces.

“It means a lot to me. It really is a respect thing for me,” Williams told TigerNet Friday. “I feel like this is a great way to honor my family.”

Williams has made multiple trips to each school, including several trips to Clemson. He was last on campus for the All In Cookout and also spent time in Clemson in June for Dabo Swinney’s high school camp.

“I already had a pretty good bond with all the coaches and the players there,” Williams said.

During the visit to Clemson in June, he spent time with 2020 quarterback DJ Uiagalelei.

“It was a great visit as always,” Williams said. “It was eye-opening to see a young quarterback like him throwing at such a high caliber.”

Nearby Auburn was seen as an early front runner, and Williams told one national recruiting writer in early June that in-state Alabama was the leader. However, the Tigers have been high on his list since offering in 2018 and appear to have the edge heading into Saturday.

“I love the atmosphere at Clemson,” Williams told TigerNet earlier this summer. “I love the fact that they are producing so many great wide receivers and putting so many receivers in the NFL.”

Williams said he’s known which school he will choose for over a week, and detailed the reasons for his decision.

“I knew for sure where I wanted to go on August 14th,” Williams said. “It’s the connections and relationship that I have with the school as a whole. Not just the football team, but the coaches and the president, too.”

Clemson has landed two commitments out of Phenix City Central in the last two classes in Justyn Ross and Ray Thornton, but Auburn has a commitment from Williams’ current teammate OL Javion Cohen.

On a recent visit, Williams spent time with his former teammates.

“I spent some time with Justyn and Ray. I stayed the night with them; it went extremely well,” Williams said. “We always have a good time every time we see each other. Those are my big brothers. He (Thornton) really isn’t recruiting me to Clemson. Of course, he wants me to come there but he tells me to go where I feel comfortable. Both of them tell me that.”

NOTE: TigerNet will be on hand in Phenix City for the announcement and we hope to have a live stream.