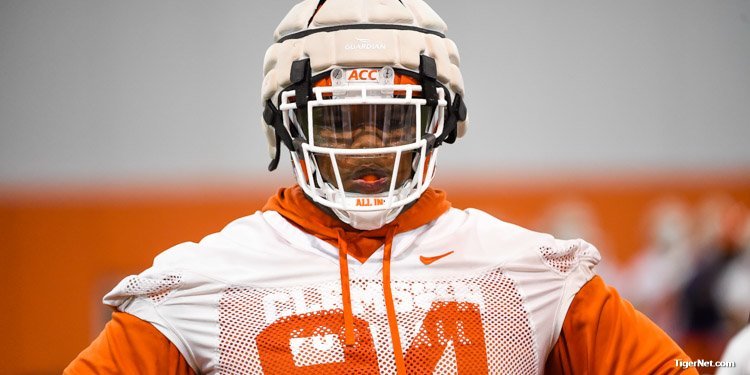 CLEMSON – Clemson head coach Dabo Swinney has built his program on the precept of family, and family takes care of their own, even in the big-money world of college football. Swinney proved Wednesday that rivalries and money are superseded by family.

Swinney announced Wednesday that freshman defensive lineman Josh Belk will transfer from the Clemson football program. The native of Fort Lawn, S.C. entered Clemson in January 2018 as an early enrollee and participated in spring practice and the spring game.

“Josh is a good young man from a great family,” said Swinney. “Sometimes circumstances change, as is the case with Josh. We are disappointed he is leaving, but I enjoyed being around him the past few months. He did everything that was asked of him and had an excellent semester academically. I wish him all the best in the years to come.”

Belk’s high school coach at Lewisville, William Mitchell, applauded what he called a “classy move” by Swinney and the Clemson program.

“It's my understanding that Coach Swinney gave Josh his unconditional release yesterday afternoon,” Mitchell told TigerNet. “It was something that they had talked about for a couple of days. In Josh's family, there are some health issues going on, and it's not my place to say more than that. It was something that was causing him to go back-and-forth quite a bit, and it was becoming more and more of an issue.

“They agreed to give him his unconditional release, and you can quote me on this, it was a real classy move by Coach Swinney and by the entire Clemson program. They understood this was a family thing. Everybody talks about them being a family program, and they are putting their money where their mouth is.”

Mitchell declined to confirm that a likely transfer spot is South Carolina, but said everything has been handled professionally by both sides.

“There has been no contact with any other program ahead of time. I am sure that will change now,” Mitchell said. “It was a real classy move to release him and understand his situation. Hopefully, it will work out good for everybody. I wonder how many other programs would do the same thing. Obviously, they can catch some flak for this, but everything was done in a professional and classy manner and I am sure both sides wish each other well.”

Click here to see Clemson's scholarships on the DL

I will be transferring from Clemson University. I appreciate the Clemson staff, fans and Coaching staff. Thanks to Coach Swinney for the opportunity. Nothing bad to say about the University and my time there. Just feel that it’s the best decision for my family and I. #GodsPlan pic.twitter.com/sk2t1KgvVL