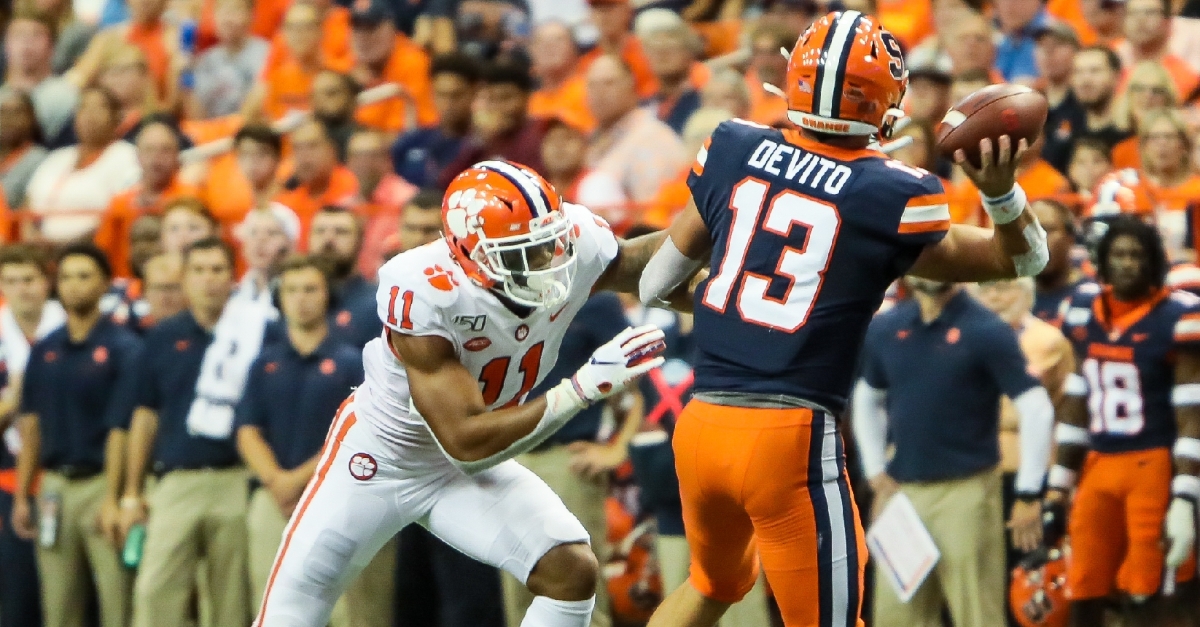 CLEMSON – A coffee bean is different in its makeup and texture than an egg or a carrot, and Isaiah Simmons wants to be a coffee bean.

Simmons is Clemson’s talented linebacker who has blossomed into one of the most dynamic defensive players in the country. Simmons had 11 tackles at Syracuse last Saturday and ranks in the top 30 nationally with 31 tackles on the season.

Simmons is not just a football player – he’s well-spoken and focused, a delight to interview and showed this week that he’s also well-read.

"There's a book as well called 'The Coffee Bean.' Great book. But yeah, I feel like just having a coffee bean mentality is just everything, because it could just help in so many ways regardless of if it's football or just actual real-life things."

Defensive coordinator told the media this week that Simmons has stepped into the role of leader, a role that Simmons cherishes.

"I don't want to say I'm the leader, but I like to consider myself as a leader," Simmons said. "We have many leaders regardless of if you're a freshman or senior. We always say there's no age limit on leadership. So we encourage everybody to become a leader just in various ways. It could be just a small part or a big part. So I like to say I'm a leader just because I've been here longer than a lot of the guys, so I can show them a lot of things that they don't know, but so yeah, I guess I am a leader but not the leader if that makes sense."

Because of his size and athletic ability, Simmons had the chance to leave after last season and enter the NFL. He decided to stay and says it was the right decision.

"I was kind of back and forth for a while, but then I just came to the realization that it'd probably be best. I didn't want to really sell myself short," Simmons said. "It was a lot of little things in my game. That was my first year playing linebacker last year. So experience was a big thing. Just get another year under my belt of playing linebacker. And it's just like I'm not used to playing in the box, or at least I wasn't.

"So I wanted to get a lot more comfortable playing in the box, knowing the run fits, knowing all the stunts that D-line does, and really just learning a lot more about football, before it's like, either you learn it or you're gone."

As a redshirt junior, Simmons can actually stay after this season, but he says he isn’t focused on making until the time comes.

"That's probably my biggest thing, was it's not 100 percent I'm leaving, obviously," Simmons said. "Just with another year of eligibility, but I just want to speak things into existence. So I guess I'm just going to pray on it and whatever the good Lord puts me to, then I'm going to go with. If it's for me to come back or if it's for me to leave I really know.

"I always tell guys, 'Let's speak things into existence.' It's kind of just like playing the game before the game. So when you're coming to a football game you won't have already played it all. So what's going to happen in this situation and that situation? So I kind of just take that approach on that."