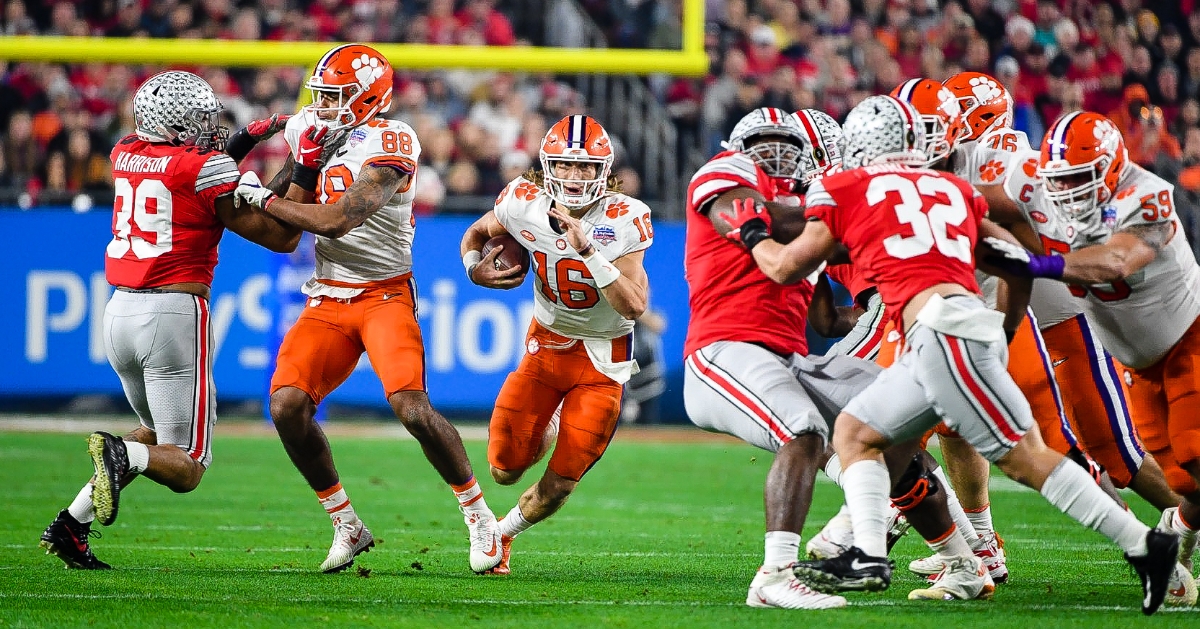 Trevor Lawrence takes off for his long TD run

GLENDALE, AZ – Clemson was punched in the mouth during the first half of the Fiesta Bowl. Faced with the decision to tap out, Trevor Lawrence and the Tigers punched back.

PLAYER OF THE HALF: When it looked like nothing could go right for Clemson on offense, there was Trevor Lawrence. The sophomore quarterback made the plays with his arm late in the second quarter, but it was his legs that were the difference.

STAT OF THE HALF: Trevor Lawrence was 9-of-18 for 98 yards through the air, but had nine carries for 89 yards, including a 67-yard touchdown.

*Spiers – Will Spiers was able to flip the field on three different occasions and force Ohio State to go on long drives. Spiers is having his best game to date with two 52-yard punts and being the weapon Clemson needs him to be with the offense sputtering in the first half.

*Off the mat – After Ohio State defensive back Shaun Wade was ejected for targeting, Trevor Lawrence missed one snap due to having to be tended to by the medical staff on the field and promptly came back in to engineer Clemson’s first touchdown the game that was capped off by a Travis Etienne dance to the endzone.

*Threes instead of sevens – Three times Clemson’s defense held in the redzone to force Ohio State to settle for field goals instead of giving up touchdowns.

*Tigers without Tee – On Clemson’s first drive of the game, wide receiver Tee Higgins went up to try and make a catch down the sideline, but his helmet came off and he hit the ground hard causing him to leave the game. Several times it looked like he was trying to talk his way into the game but his efforts were futile.

*Dobbins off to the races – Ohio State running back J.K. Dobbins burned the Clemson defense with two huge runs – one of 68 yards and one of 64 yards.

*No offensive rhythm – Clemson’s offense moved the ball relatively well on its first drive but failed to find any consistency or rhythm after Higgins left the game. The offense didn’t come to life until late in the half.

TURNING POINT OF THE HALF: The Tigers took over at their own 25 and put together a drama-filled scoring drive. On the sixth play of the drive, Lawrence was sacked on third down and stayed on the turf in obvious pain. It looked like the Tigers would have to punt, but Ohio St.’s Shaun Young was called for targeting and was ejected. The call gave the Tigers a first down and Chase Brice came in for one play.

A pass interference penalty put Clemson in the redzone for the first time all night, and three plays later Etienne burst around right end and then turned upfield for an eight-yard scoring run. With just under three minutes to play in the half Ohio St. led 16-7. The Tigers forced a punt and it was all Lawrence on the next drive.

A third-down completion to Ross put the Tigers at their own 43, and Lawrence took off up the middle, broke a tackle and then outraced the defense to pay dirt for a 67-yard touchdown run, the longest run of his career. Late in the first half, it was 16-14 Buckeyes with the Tigers on the prowl.

WHAT CLEMSON NEEDS TO DO TO WIN: On offense, it all starts upfront. Clemson’s offensive line has to step up to the challenge that the Ohio State defensive line presents. When faced with third-and-short, too many times the Tigers came up short because there wasn’t enough push on the line or the Buckeyes got to Trevor Lawrence. They have to find a way to Travis Etienne involved and find him running room.

Defensively, Clemson needs to get more pressure on Fields and find a way to stop Dobbins. There were times when Fields had all day to find a receiver, while Dobbins found room on the outside. The Tigers need to get pressure without blitzing.