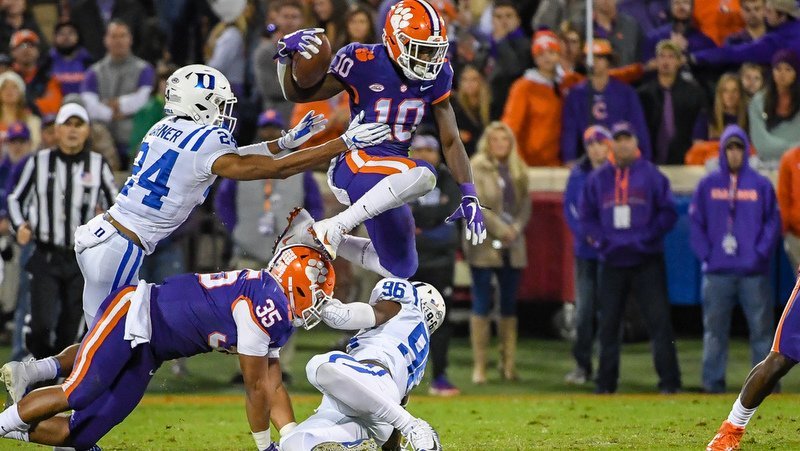 Derion Kendrick hurdles a Duke player in the first half

CLEMSON – After a forgettable first half, Clemson came out of the locker room hitting on all cylinders.

OFFENSIVE PLAYER OF THE GAME: Clemson’s offense didn’t start clicking until Travis Etienne got the running game going. On Clemson’s first drive of the second half, Etienne had runs of 20 yards and 27 yards leading to a Clemson touchdown and giving Clemson a 21-6 lead. Etienne then ran for a 29-yard touchdown on the next drive. The sophomore finished the game with nine carries for 81 yards and two scores.

DEFENSIVE PLAYER OF THE GAME: Clelin Ferrell saved one of his best performances for Senior Night. Ferrell had five total tackles, two-and-a-half tackles for loss and two sacks. With his two sacks, Ferrell has 10.5 sacks on the season which is a new career high. He is the first player since 2016 (Carlos Watkins) to tally double-digit sacks.

*First score: The Tigers finally put it together early in the second quarter, marching 75 yards in just seven plays. The sixth play of the drive was a 41-yard pass to Justyn Ross down the left sideline, and the next play was a two-yard scoring run by Tavien Feaster. With 12:44 to play in the half, Clemson led 7-6.

*Tigers hold: The Blue Devils put together another long drive, but missed a 42-yard field goal. The Tigers took over at their own 25 and scored in just six plays. The key play on the drive was a third-down throw to Derion Kendrick that covered 33 yards. Three plays later Etienne bounced off of multiple tacklers and bullied his way into the end zone on a 29-yard scoring run, and the Tigers led 28-6 with 4:20 to play in the third.

UP NEXT: Clemson ends its regular schedule with the annual rivalry game against the South Carolina Gamecocks before heading to Charlotte for the ACC Championship Game against Pittsburgh. The Tigers and Gamecocks will square off at 7 p.m.