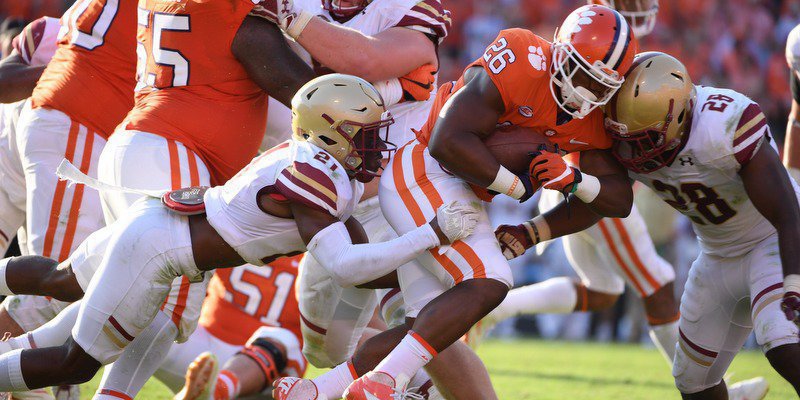 CLEMSON – It wasn’t pretty for much of the game, but the Tigers did just enough to remain undefeated.

Boston College (1-3 overall, 0-2 ACC) gave the second-ranked Tigers (4-0, 2-0) a fight that they apparently weren’t expecting, but the defense held tough and the offense came alive in the fourth quarter to lead Clemson to a 34-7 victory in Death Valley Saturday evening.

OFFENSIVE PLAYER OF THE GAME:On a day when Clemson’s offense looked like it was sleep-walking, freshman running back Travis Etienne brought woke up a sleepy Death Valley crowd. The Louisiana native had five carries for 72 yards, including a 50-yard run late in the fourth quarter, to put Clemson up 21-7. The freshman finished with 113 rushing yards on nine carries, two touchdowns, and 139 all-purpose yards. Etienne continues to make the case for more carries and more playing time.

Picks, picks, picks: Kelly Bryant threw two interceptions in the game. The first was an ugly attempt that was thrown as the pocket collapsed. The second went off the fingertips of an out-stretched Hunter Renfrow and into the arms of a Boston College defender.

Offense responds:It’s no secret that the offense didn’t have its best day, but when the Eagles tied the game late in the third quarter, Bryant and the offense responded. On 3rd-and-9, Bryant hit Diondre Overton down the sideline for a 23 yard gain and Adam Choice rumbled six yards into the endzone on the very next play to give the Tigers a 14-7 lead. 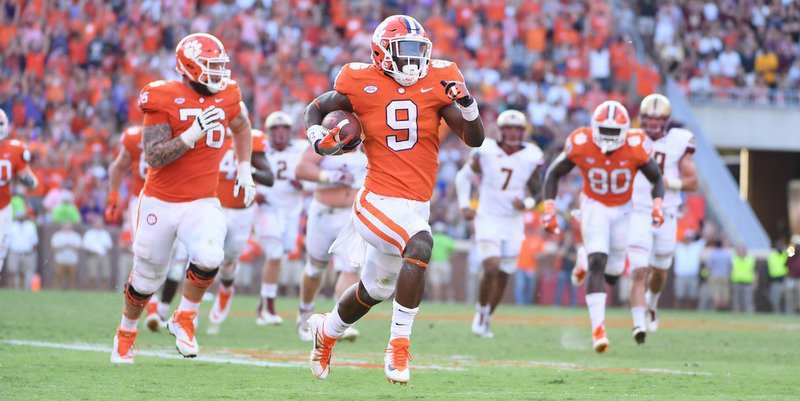 Spence gets the start:Redshirt junior Alex Spence got the first start of his career, replacing starting kicker Greg Huegel, who tore his ACL earlier in the week. Spence handled all kickoff duties – one touchback – and made 4-of-5 extra point attempts.

Etienne things: Travis Etienne continued to do Travis Etienne things…break tackles and score touchdowns. On 2nd-and-7 late in the fourth quarter, Etienne broke two tackles as he sped past the defense for a 50-yard touchdown, giving Clemson a little breathing room and a two-touchdown lead.

STAT OF THE GAME:Two players – Trayvon Mullen and A.J. Terrell – notched their first career interceptions in Saturday’s game. Clemson scored seven points off of the turnovers.