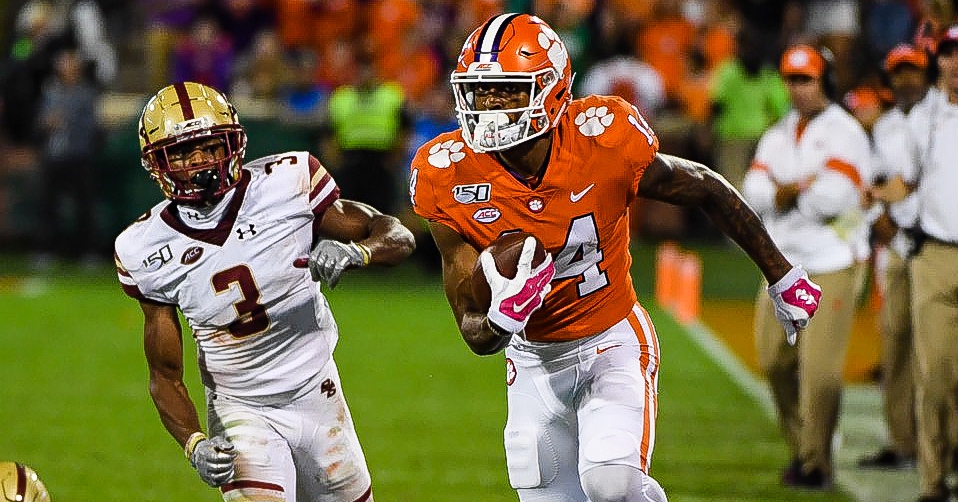 Diondre Overton had three touchdowns on the night

CLEMSON – The fourth-ranked Clemson Tigers continued its dominance over Boston College with its most complete game of the season.

The win was also a ninth consecutive against Boston College, dating back to 2011.

OFFENSIVE PLAYER OF THE GAME: Quarterback Trevor Lawrence had arguably his best game of the season. He did all of the things you look for in a quarterback – was accurate, took his check-downs when his first reads weren’t there, got down or out of bounds when his number was called in the running game. Lawrence finished the game 16-of-19 for 275 yards and three touchdowns. He also added eight carries for 42 yards.

*Honorable Mention: Diondre Overton had a breakout game. He had three catches for 119 yards and three scores – two from Lawrence and one from Chase Brice.

DEFENSIVE PLAYER OF THE GAME: Chad Smith has been getting more and more comfortable in his starting role every week and with that his confidence has grown and the game appears to be slowing down. He had nine tackles, a tackle for loss, a sack and a forced fumble that led to a scoop and score by Logan Rudolph.

*Quick Strike Offense – The Eagles were forced into another punt and the Tigers took over at their own 25. Five plays (and two pass interference calls) the Tigers found the end zone, with Travis Etienne bowling in from three yards out as Clemson took a 10-0 lead with 6:57 to play in the first quarter.

*Scoop and Score – Clemson punted for the first time all night to open the second half and the Eagles gained two quick first downs on the ground. The fourth play was a disaster, however. Eagle quarterback Dennis Grosel dropped back to pass and was hit by linebacker Chad Smith. The hit knocked the ball loose and defensive end Logan Rudolph scooped up the loose ball and rumbled 39 yards for the touchdown. With 11:18 to play in the third quarter, Clemson led 45-7.

STAT OF THE GAME: Boston College gave up 674 yards of total offense, the most in program history.

UP NEXT: Clemson plays its second consecutive game inside friendly confines of Death Valley, hosting in-state foe, Wofford, at 4 p.m. The Terriers are second in the Southern Conference and defeated Chattanooga 35-34.