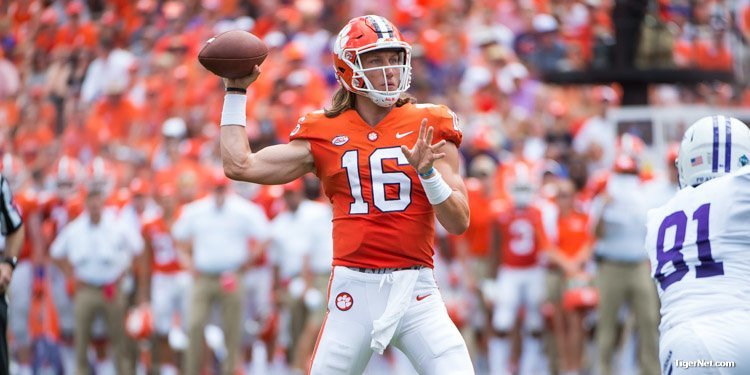 Lawrence throws a pass during the first half

CLEMSON – The Tigers took care of business Saturday afternoon, but the game only added fuel to an already heated quarterback battle.

Kelly Bryant finished the day completing 10-of-16 passes for 127 yards and a touchdown and rushing for 44 yards and a score on five carries.

Trevor Lawrence – the freshman out of Cartersville (GA) – completed 9-of-15 passes for 137 yards and three touchdowns.

OFFENSIVE PLAYER OF THE GAME: Amari Rodgers did his damage on offense and special teams and may be the most overlooked player on Clemson’s offense. The sophomore out of Knoxville caught three passes for 44 yards and touchdown and carried the ball for 10 yards. He added two punt returns for 87 yards, including a 62-yard return that included a nasty stiff arm as he broke free down the sideline. Rodgers finished the day with 141 all-purpose yards and will only get better as the season goes on.

DEFENSIVE PLAYER OF THE GAME: Clemson’s starting defense was as advertised and was nothing short of impressive. However, when Shaq Smith finally got his opportunity in the second half, he showed why fans have been so excited about his potential. Smith was all over the field and in on several plays even when he wasn’t credited with the tackle.

*Trevor Lawrence – Lawrence didn’t have the flashy start that he had in the spring game, but once he got comfortable and got the jitters out, he was exactly what we expected. He was poised under pressure and didn’t get rattled even when the plays didn’t go his way. He made throws to the sideline and most quarterbacks in college football can’t make. Only time will tell if it’s enough for him to be named the starter.

There will be a lot of hype after his performance but remember that lining up against Texas A&M in front of 100,000-plus is a little different from a home game against Furman.

*Lyn-J Dixon – He didn’t see his first action until midway through the first quarter but his ability to change direction and hit that next gear is extremely impressive. He stopped and changed his course three different times on one run. The next play, he hit the hole and took it 61 yards, setting up a Clemson touchdown.

*Braden Galloway – The Seneca native has battled injuries going back to his senior year of high school, so many wondered when we would see him on the field. Galloway entered the game during a two-minute drive to end the first half. He caught two passes for 25 yards, setting up a touchdown before the end of the half. Galloway caught the first touchdown pass of his young career on a 12-yard pass from Lawrence.

STAT OF THE GAME: The Tigers amassed 531 total yards – 277 yards through the air and 254 yards on the ground – on 71 plays while playing three different quarterbacks. Three different players – Amari Rodgers, Justyn Ross and Braden Galloway – all scored their first career touchdowns.

UP NEXT: Clemson travels to Texas A&M in a 7 p.m. ET matchup at Kyle Field. ESPN’s College GameDay will be on hand for all of the festivities.

Furman travels to Elon next for a 6 p.m. matchup with the Phoenix.